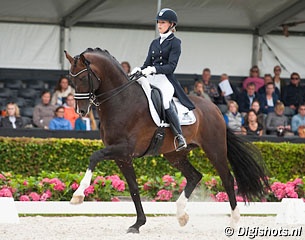 The KWPN licensed breeding stallion Zhivago is back in the picture and will continue his dressage show career under Dutch junior rider Kristy de Roo.

Zhivago is a 2004 born Dutch warmblood stallion by Krack C out of Orendy (by Jazz). He is bred by Pegasus stables and is owned by Joop van Uytert and stallion station de Radstake.

Zhivago made his first claim to fame when he became the 2007 KWPN reserve licensing champion. He went on to win the KWPN stallion performance test

Under Theo Hanzon Zhivago won the 2009 Pavo Cup Finals, the 2010 and 2011 KWPN Stallion Competition Finals and competed at the 2010 World Young Horse Championships in Verden. Hanzon trained up to small tour level. In 2014 Tommie Visser then took over the ride and competed him up to Intermediaire II level with their last show being in 2015. John Tijssen was then briefly on board, before Dinja van Liere got the ride. Zhivago dropped back to small tour level.

Zhivago only competed at two internationals in his life: the 2010 World YH Championships and under Dinja van Liere he finished fifth the 1* CDI small tour classes at the 2016 World Young Horse Championships in Ermelo, The Netherlands.

The 17-year old Kristy de Roo, who trains with Coby van Baalen, will now compete Zhivago at junior riders' level. She got the ride on the dark bay stallion in April.