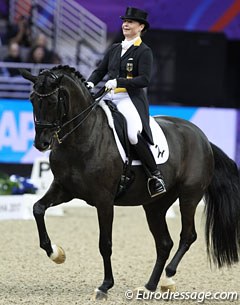 Isabell Werth has announced the withdrawal of her number one Grand Prix horse Weihegold from the 2017 German Dressage Championship, which is the first mandatory team selection trial leading up to the 2017 European Championships.

Under Isabell Werth Weihegold won team gold and individual silver at the 2016 Olympic Games in Rio and most recently she won the 2017 World Cup Finals in Omaha, Nebraska. She is Isabell's number one choice to ride on the German team for the 2017 European Championships in Gothenburg in August.

The 2017 German Championships take place in Balve on 8 - 11 June 2017 and is the first of two team observation and selection trials. The CDIO Aachen is the next one. Weihegold will not be competing in Balve though due to an inflammation.

"It is really such a pity and I'm truly sad that I can't ride Weihegold in Balve," Werth told Dressursport Deutschland, the online platform exclusively for German squad riders managed by Kim Kreling. "On the other side I'm happy we're just dealing with a harmless inflammation due to a bacterial infection."

Werth is currently listed in the top ten of the FEI Riders Ranking with no less than 3 horses; an unprecedented feat.