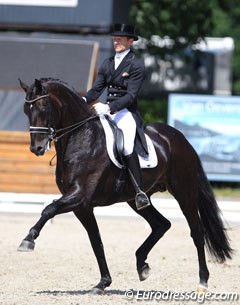 On his international Grand Prix debut aboard 9-year old Zonik at the 2017 CDI Roosendaal on Thursday 1 June 2017, Edward Gal made an impressive statement making it clear to all that he is an undeniable Dutch team candidate for the upcoming European Championships in Gothenburg. In beautiful sunny summer temperatures, Gal and Zonik scored a winning 75.780% in the Grand Prix.

The 2017 CDI Roosendaal Grand Prix featured 28 combinations, but the atmosphere only became tangible when Gal and Zonik entered the arena. The panel of judges, which included Roudier (FRA), De Wolff van Westerrode (NED), Verbeek (NED), Vint-Warmington (EST) and Koffmahn (AUT), had to sit on their edge of their seat to assess the new pair and set the first standard as a guidline for the rest of the judges.

Gal and the Austrian owned Danish warmblood stallion Zonik (by Zack x Romanov) produced a very strong test with some wonderful work and a high score was expected. However, the ride was not faultfree and those issues clearly threw the judges off balance. 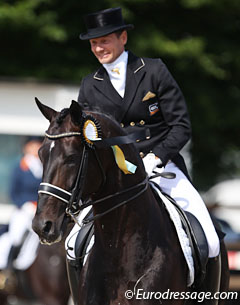 Gal presented Zonik is a nice frame: up in the bridle and on occasions even with the nose nicely out. Unfortunately the horse was ridden entirely on the curb and Gal's half halting, especially on the right lead, could have been more subtle at times. The trot extensions were lovely with good overtrack and good lengthening of the frame. The half passes covered much ground, but there could have been more parellellity with the hindquarters. The rein back was problematic, with the horse dragging its feet (scores from 5 - 6.5).  The passage has good elevation and airtime, the first piaffe was nice with one step having some backwards tendency. The extended walk needed more lengthening of the frame and overtrack but the rhythm was good (7.5 - 8). The collected walk was a bit too free and the horse got crooked in the transition to passage (5 - 7). The second piaffe was qualitywise the least one of the three with the horse not stepping under, but pulling the hocks high (7 - 8.5). The two tempi changes were solid and correct. The extended canter was uphill but needed more stretching of the frame (7.5 - 9). The one tempi changes were straight but quite constricted in the body, short and there was a mistake in them (5 - 7.5). The pirouettes had good lift and were small. The passage on the final centerline was active and energetic, the piaffe at X crooked to the left (7 - 8) and the end halt was not square, nor immobile (5 - 7.5).

Gal and Zonik had a great, first CDI ride, without a doubt, and there is room for improvement. The horse seems to have a great disposition with a good dose of internal relaxation in contrast with Edward's former top horse Undercover. It would be nice to see Zonik ridden on a less tight curb, more chewing and with a bit more natural swing and stretch in the top line. With 75.780% in Roosendaal to kick off their career at highest level, they placed well ahead of the second pair, Swedish Therese Nilshagen and 10-year old Oldenburg licensed stallion Dante Weltino OLD (by Danone x Welt Hit II). 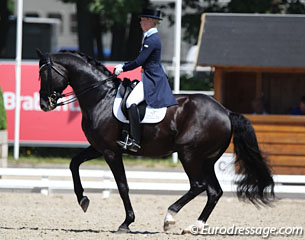 Nilshagen and Dante Weltino OLD were the direct opposites of Gal and Zonik when it comes to bridle contact. Dante Weltino is ridden with the lightest of contact, soft and elastic in the bridle but at times the black stallion gets deep. Especially in his passage and in the trot half passes he could stay more up in the frame. The first trot extension was quite conservative, the half passes were ground covering. The horse took huge steps backward in the rein back, which seemed to puzzle the judges (4 - 7). In the second trot extensions the horse could push a bit more from behind and swinging through the back. The first piaffe and passage were nice, in the second passage the horse got uneven in stridelength (more activity with the right hind). Overall the piaffe and passage are very elegant and light footed but the transitions in and out need to be more fluent. The tempi changes were correct but needed to be more straight in the body. The extended canter was fabulously uphill. The pirouettes were small but the right one barely had enough strides. Nilshagen finished with a good centerline. They finished second with 73.600%. 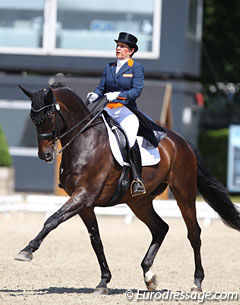 Jeannette Haazen and the Belgian owned 14-year old Belgian warmblood gelding Dabanos d'O4 (by Abanos x Donnerschlag) were third with 72.180%. Haazen has done miraculous things on the high-strung dark bay gelding, who used to lose all his hard earned points with his fantastic piaffe and passage due to tension. Dabanos was always very unsettled in the arena, distracted and tense. However, with Haazen's magical hands and the horse's growing age, he has found his stride. The Dutch rider, who has lived in Belgium for years, already had a stunning performance at the CDIO Compiegne a week ago and she repeated that in Roosendaal. The horse was beautifully up in the bridle with nose out and very quiet in the contact. The half passes had good crossing of the legs, the first piaffe was super on the spot, and in the extended he even remarkably achieved one to two hooves overtrack (a record!) but the rhythm remained mediocre. In the collected walk he paced. The second passage was not forward enough. The two tempi changes were ok, despite one lesser change and in the ones the last change was short behind. The zig zag was lovely. The pirouettes accurately ridden, although the exit of the right one needed a bit more polishing. They scored 72.180% for third place.

Eurodressage's Astrid Appels was on the scene taking photos. If you are interested in digital files or prints for personal use, social media, contact us.