Anna Kasprzak Adds For Emotion to her String of Horses 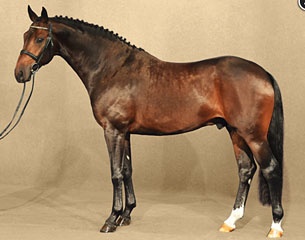 Danish Olympian Anna Kasprzak is on a shopping spree for young talent. After acquiring the 8-year Quarton last week, she has now added the 4-year old Oldenburg stallion For Emotion to her string.

For Emotion is a 2013 born Oldenburg stallion by Foundation out of Bundeschampionate mare Samira (by Sandro Hit x  Rockwell).

He is approved for the Oldenburg society and in February 2017 he did his 14-day stallion sport test in Munster, where he became the second highest scoring stallion. He earned 9.2 for trot, 8.7 for canter, 8.5 for walk and 9.5 for rideability and general impresson. His total was 9.08 points.

Andreas Helgstrand acquired For Emotion in December 2016 at the PSI Auction for 550,000 euro. He was presented for licensing at the 2017 Danish Warmblood Stallion Licensing but got rejected by the committee.

Kasprzak's mom Hanni Toosbuy Kasprzak, who is owner of the major multinational shoe company Ecco, acquired For Emotion for her daughter.

"My mom and I have been keeping an eye on For Emotion for a long time, as we considered him the perfect stallion for sport," Anna explained. "He's an incredibly smooth mover, balances and with top gaits. I already feel he's a dream to ride. We also bred two of our mares to him this year and are looking forward to his first crop."

For Emotion will remain at Helgstrand Dressage, where he stands at stud. "I'm looking forward to getting him home (after the breeding season) and to begin training him," Anna added. "I hope to start him in the 4-year old Championship this year and if there is a demand for him, he'll also stand at stud next year."