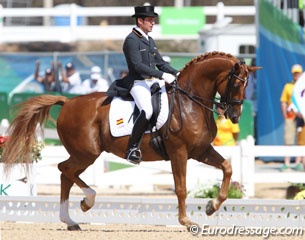 Lorenzo (by Lord Loxley x Rubin Royal) is bred by Martin Niedermair in Germany and was owned by the Danish couple Kirsten and Jorn Elkjaer-Holm, who had bought Lorenzo as a 3-year old.

Being an assistant trainer at Andreas Helgstrand's sales yard in Denmark, Jurado Lopez made his international show debut on Lorenzo in February 2016 at the CDI Vestfold in Norwat, and from there has a stellar rise on the FEI World Riders Ranking and on the score board.

They competed in Herning, Hagen and Odense before making a major splash at the CDIO Aachen where they became the absolute crowd favourites in the freestyle and finished fourth with an incredible 83.350%. The pair became the Spanish team anchor at the 2016 Rio Olympic Games and finished fifth in the Kur to Music with 83.625%. Also in Rio, their freestyle was one of the most crowd beloved kur rides. The judges were mesmerized by this charming combination and seemed to ignore the fact that the horse has little self carriage in passage and often moved with a tight neck and hind legs out. Nevertheless, Jurado Lopez and Lorenzo certainly had that Spanish flair and the horse's sympathetic appearance definitely entertained. 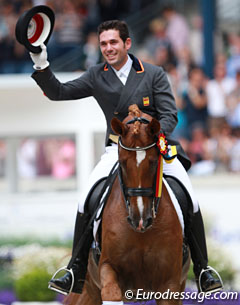 After Rio, the pair tried to qualify for the 2017 World Cup Finals and had excellents starts at the CDI-W's in Odense and Salzburg. Unfortunately they lost their groove at the CDI-W in Amsterdam, where the horse finished 10th in the Grand Prix after oddly being against the aids and appearing unhappy. They got eliminated from the freestyle. It was their last show together.

Lorenzo had always been at Helgstrand's as a sales horse and has now found a new owner in Charlotte Jorst, who regularly shops at Andreas' yard. She already bought her number one and two Grand Prix horses there: Nintendo and Akeem Foldager.

"I'm so happy to introduce Lorenzo. We are going to have the best time together. I cannot wait for us all to follow him. Watch his rides and just have fun," Jorst announced on her Facebook page.