Is My Horse Difficult or In pain? Can Facial Expressions be Used to Determine the Presence of Pain? 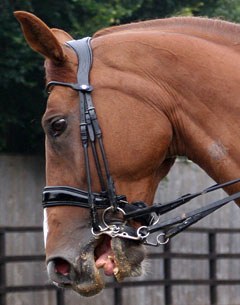 There is undisputed evidence to show that owners, riders and trainers have a poor ability to recognise signs of pain manifest as lameness when horses are ridden. Approximately 47% of sports horses in regular work and assumed to be sound have pain-related gait abnormalities.

In a dressage horse the early stages of lameness may only be manifest under certain conditions and may be misinterpreted as conflict behaviour, difficulties in learning a movement or ‘one-sidedness’. However, tension, evasions, unevenness in the contact, resistances, spookiness, difficulties with specific movements such as flying changes could all potentially be a manifestation of pain.

As a result, problems are labelled as training-related, rider-related, behavioural, or deemed ‘normal’ for that horse because ‘that’s how he’s always gone’. Unfortunately that means pain-related problems are often disregarded. The horse continues in work, the primary problem gets progressively worse and the horse develops secondary adaptations, such as stiffening of the back and loss of top line musculature. If pain goes unrecognised and is not referred to a lameness specialist early enough, problems become more difficult to manage than if they had been identified sooner.

Based on many years as both a rider and an equine veterinarian, I have observed many behavioural changes that occur in lame horses that improve when the pain causing lameness is abolished. We therefore set out to investigate whether these behavioural changes could be categorised and tested to determine whether they could be used to differentiate non-lame and lame horses. 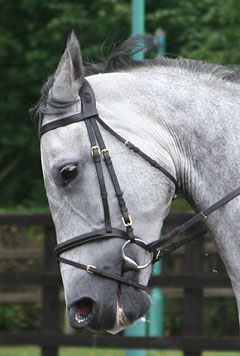 In phase 1 the objectives were to develop and test an ethogram (a list of descriptors of behaviour) to describe facial expressions in ridden horses and to determine whether individuals could interpret and correctly apply the ethogram, with consistency among assessors. An ethogram was developed by reference to previous publications and videos and photographs of 150 lame and non-lame ridden horses, and a training manual was created. The ethogram consisted of a catalogue of facial expressions including the ears, eyes, nose, muzzle, mouth and head position. Thirteen assessors (4 veterinarians of variable experience, 3 equine technicians, 2 equine studies graduates, 2 amateur horse owners, 1 equine veterinary nurse, and a British Horse Society Instructor) underwent a training session and, with reference to the training manual, evaluated still lateral photographs of 27 ‘training heads’. Features were graded as ‘Yes’, ‘No’ or ‘Cannot see’ (when it was not possible to determine the presence or absence of a feature). The ethogram was adapted and, after further training, the assessors blindly evaluated 30 test heads from non-lame and lame horses. The mean percentage of overall agreement was high (80%) and it was concluded that the ethogram could reliably be utilised to describe facial expressions of ridden horses by people from different professional backgrounds.

Phase 2 aimed to test if the ethogram could be used to distinguish between photographs of the heads of non-lame and lame horses. During this phase a pain score from 0 - 3 was applied to each of the facial expressions for the mouth, tongue, muzzle, eyes, ears and head position, based on published descriptions of pain in horses. A total pain score was determined for each head photograph. Each horse had several photographs, so an average pain score was calculated for each horse. The non-lame horses were event or dressage horses warming up for a four star three-day event or international dressage competition. The ethogram was applied blindly by a trained analyst to 519 photographs of the head and neck of 76 lame (n=76) and 25 non-lame (n=25) horses acquired during ridden trot and canter. These included images of seven lame horses acquired before and after diagnostic analgesia had abolished lameness. 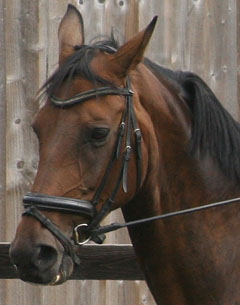 A pain score (0-3; 0=normal, 1-3=abnormal) was applied to each feature in the ethogram, based on published descriptions of pain in horses. Pain scores were significantly higher for lame horses than non-lame horses. Severely ‘above the bit’, tipping or twisting the head, asymmetrical position of the bit, ear position (both ears backwards, one ear backwards and one to the side, one ear backwards and one ear forwards) and eye features (exposure of the sclera [the whites of the eye], the eye partially or completely closed, muscle tension behind the eye, an intense stare) were the best indicators of pain. To further prove the effectiveness of assessing pain in a horse with the facial expressions ethogram, a selection of lame horses underwent lameness assessment and nerve blocking (using local anaesthetic solution), to alleviate the pain causing them discomfort when ridden. Comparison of their facial expressions before and after using local analgesia showed a significantly lower pain score once the pain causing lameness had been removed.

It was concluded that application of the ethogram and pain score could differentiate between lame and non-lame horses, which means that assessment of facial expression could potentially improve recognition of pain-related gait abnormalities in ridden horses by owners, riders and trainers. There were some features that were not very common, such as tongue lolling, so their potential significance as a reflector of discomfort may have been underestimated. The study was based on still photographs of the head alone, so that the assessor could not be influenced by any other feature of the horse. This meant that the frequency or duration of occurrence of any specific feature (e.g., mouth opening, severely behind the bit) could not be determined and audible cues such as teeth grinding could not be assessed. There were some behaviours that showed mild overlaps between the non-lame and lame horses and it is important that no single feature is assessed in isolation. Mild separation of the lips was commonly seen in both sound and lame horses, but with higher frequency of occurrence in sound horses. However, wider separation of the lips exposing the gums and teeth, with or without separation of the teeth was more likely to be seen in lame horses, although it was documented in sound horses. Salivation, a parasympathetic response, is considered to be a sign of acceptance of the bit and relaxation of the jaw and was more likely to occur in sound horses. Several observations were prospectively ascribed a pain score of only 1 (on a scale of 0-3), but based on the relative frequency of occurrence in lame horses compared with sound horses, appeared to be accurate potential indicators of the presence of pain and perhaps should have been assigned a higher score. These features included twisting of the head, one ear forward and one back and partial closure of the eyelids. 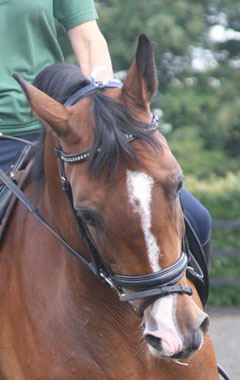 The study was restricted to trained horses and the results are not necessarily transferrable to young untrained horses, in which the differentiation between conflict behaviour and pain may be more challenging. Nonetheless it is considered likely that the ethogram can be similarly applied.

From a practical perspective in a dressage horse it is important to recognise that a pain-related problem may only be manifest under certain circumstances, but usually in a repetitive manner. So the horse may seem ‘happy’ in most of its work, only to show facial signs of potential pain in specific movements; or in collected paces but not working paces; or only on one or both reins in canter, appearing normal in trot. Change in facial expression, tension, distress or unwillingness apparent several days in succession are likely manifestations of pain. There are other adaptations to pain that cannot be detected based on the current studies, including leaning on the bit and becoming strong. It is important to recognise that horses can often be made to something despite the presence of pain.

The next stage of the project is the development of a whole horse ethogram applied to video recordings of lame and non-lame horses, and lame horses before and after abolition of lameness by nerve blocks. The results are currently undergoing statistical analysis, but is it nonetheless clear that difference will be seen between non-lame and lame horses. 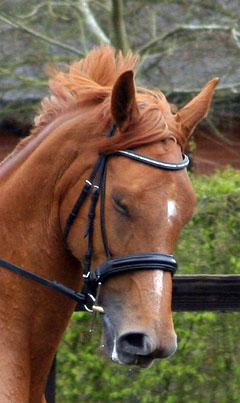 Recognition of changes in facial expression could potentially save horses from needless suffering and chronic injuries, by enabling owners and trainers to recognise pain sooner, so that the horses receive the veterinary care that they need. Owners, riders, trainers and some veterinarians are known to struggle with recognising when a horse is lame from looking at horse’s gait alone. Some lameness is so subtle that only an expert eye can see it. The utilisation of this practical tool for recognising facial expressions, could dramatically improve the health, performance and welfare of all horses.

A video explaining the background to the studies and their importance is available at: www.youtube.com/watch?v=JKzwPrIShTY

This study was generously supported by World Horse Welfare and the Saddle Research Trust.

Related Links
Naughty Horse or Is He in Pain? The Answer is Written All over his Face
The Effect of the Pessoa Training Aid on Temporal, Linear and Angular Variables of the Working Trot
Stem Cells: Getting to the Stem of It