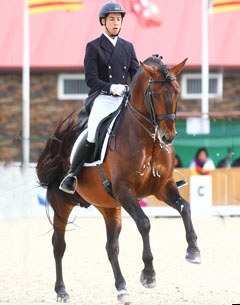 At only the third international competition for horse and rider, Portuguese João Miguel Torrao and Monte Velho's Lusitano stallion Equador signed for the victory in the Prix St Georges and Intermediaire I Kur to Music at the 2017 CDI Segovia in Spain on 12 - 14 May 2017. The future looks brights for this talented pair which consistently scores over 70%.

“Equador went very well throughout the entire show, and we were thrilled with the response from everybody," said the proud owner Diogo Lima Mayer of his 8-year old Pure bred Lusitano stallion (by Quo-Vadis SS x Que-Ha MVL). "We are particularly excited as this horse was bred by us at the Monte Velho Equestrian Resort in Portugal and has a very famous  and functional lineage. His great-grandfather was Jabuti JME, a favourite of Riding Master Nuno Oliveira, and his grandfather is Hostil, the horse of the very famous Master Guilherme Borba.”

On the first day in the Prix St Georges, Equador’s rider João made a small mistake in the flying changes but still managed to score an impressive 71.211% to best a field of 22 combinations. On the second day in the Inter I Kur to Music, the horse was in practicular great form, and despite it being Joao’s first ever Kur in competition, the duo managed very well. They scored 71.050% to top the leader board.

“The kur in particular had only been put together not long before the show with little time to practise, and in the test Joao was a little ahead of the music. He missed the changes which is one of the horse's most secure exercises," Diogo explained. "After the Kur and despite the win, Joao was disappointed for not having performed at his best. I feel this speaks a lot about the rider’s character as a perfectionist, who always wants to get things done correctly and to his full potential.”

Sky Is the Limit at Monte Vehlo

With such promising initial results and much room for improvement, the pair has not even come close to its limits. The 22-year old João Torrão studied Equine science in Portugal before he came to Monte Velho on a summer internship. The equestrian centre and hotel resort later hired Joao as their full-time rider and trainer. 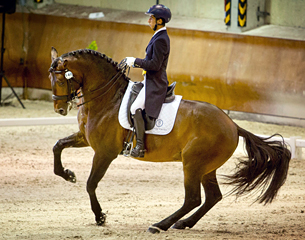 The enthusiastic João is now one of the most popular instructors at the Monte Velho Equine resort located in central Portugal. He loves teaching almost as much as competing.

“From the minute I met João I knew I was in the presence of something special. Not only  does he have a great riding technique, but also in terms of character and dedication," said Diogo. "Coralie Baldrey, who is head trainer at the Monte Velho Equine Resort, now trains both Joao and Equador and she has been a phenomenal part of their evolution."

Because the mission with João and Equador is a very ambitious one, Diogo chose Coralie as he believed she could be the person to take them all the way.

“The two make an incredible training team at Monte Velho and Coralie and João will continue to work together to improve and train this very talented horse," he said.

João and Equador will now slowly but steadily work at consolidating the Prix St Georges' movements on the 8-year old stallion before tackling the next level on their way to Grand Prix. 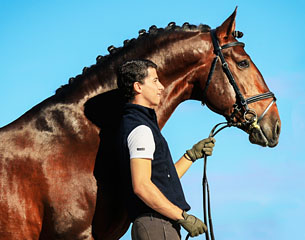 “We will also help Joao gain more experience in competition, so that as the horse moves toward Grand Prix the pair is ready to give it their all at senior level," said Lima Mayer. " However, we do not expect to compete until after the summer. First, Equador will focus on his very important breeding duties and Joao will work hard on the training aspect and on securing the exercises so that the pair can come out again toward the end of the year.”

When asked if Diogo expected this success so early on in the horse's career, he replied that this is the culmination of a 5-year project, which he believed was possible.

“I was very happy to see João and Equador take the lead ahead of riders with a lot more experience, including three Olympic riders from Spain. I  know this horse's potential and I knew they could do it. I am excited to see them evolve in the future.”