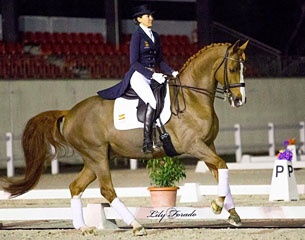 Beatriz Ferrer-Salat and her 16-year old Westfalian gelding proved that they still got swagger, winning the big tour classes on their come back since Rio at the 2017 CDI Segovia in Spain held 12 - 14 May 2017. The Spanish duo won the Grand Prix and Special with supreme 75% marks.

In a field of 22 competitors, Ferrer-Salat and her De Niro x Weltmeyer offspring Delgado aced the Grand Prix with 75.680%, miles ahead of the second placed pair, Claudio Castilla Ruiz and Alcaide (70.360%). In the Grand Prix Special the duo bested 13 other riders with their 75.294% winning score. Castilla Ruiz and Alcaide were second again on 71.451%.

"Delgado went very well in Segovia," Ferrer-Salat told Eurodressage. "He did two great tests with a lot of expression and ease at the same time. I think he feels better than ever. It's such a fun and pleasant horse to ride."

Beatriz' seasoned Delgado had not competed in 9 months since the 2016 Olympic Games in Rio de Janeiro, Brazil because the gelding had strained a tendon in Rio and Beatriz wanted to give him maximum opportunity to recover.

"Although he has never been lame, we wanted to make sure that the tendon recovered well," said Beatriz whose Delgado already suffered from a tendon injury in 2010 and again in 2012. Delgado returned to amazing fitness and in 2015 he won Kur Bronze at the European Championships in Aachen.

Ferrer-Salat aims to ride Delgado at the 2017 European Championships in Gothenburg and will only compete her horse sparingly this show season. Her next start is scheduled for the 2017 Spanish Championships in Segovia

"I would love to (ride Gothenburg)," said Beatriz. "If he keeps this good form and they take me for the team," she added. 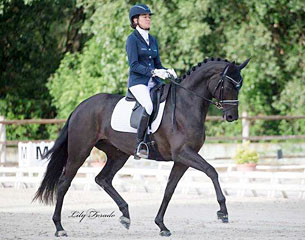 "The breeding stable Es Fangar from Mallorca, which also organizes the nice, international shows in October, brought her to me in December 2015," Bea explained. "We won two tests in Segovia called Clásica, which is level M. She is a talented mare who learns very quickly."