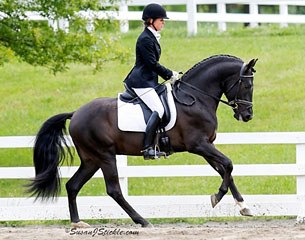 Per approval by the Board of Directors at the 2017 January Annual Meeting, the United States PRE Association introduces a new program for riders of PRE horses for competitive dressage. The USPRE Sports Initiative for Dressage is a program that will contribute to the development of PRE pairs at the FEI-levels (Junior, Young Rider, U25, Young Horse and Adult) toward the ultimate goal of United States team participation.

While the presence of PRE horses at USDF and CDI shows across the country has increased exponentially in the past decade, the ultimate goal of having a PRE horse participate on the United States Dressage Team at the Grand Prix level is unachieved. After years of promoting the PRE horse as a viable alternative for top sport, the PRE community has reached certain significant milestones: PRE horses with US riders have achieved USDF national championships at the FEI levels, placed well in international shows against top competition, and have been invited to participate in the Festival of Champions at all FEI levels (Grand Prix, Small Tour, U25, Young Rider and Junior), however to date no PRE horses have risen to the distinction of selection for a US Adult Team. USPRE believes that by establishing this Sports Initiative for Dressage more PRE horses and riders of exceptional quality will rise to the top of the field in order to become part of the USEF developing program for team contention.

The Sports Initiative in 2017 will consist of two “observation clinics”, conducted by United States Equestrian Federation (USEF) Dressage staff. The first will be held in July 2017 in central California with clinician Charlotte Bredahl (details coming soon). The second will take place in Wellington, Florida in the fall, with dates and details to be announced. Florida and California were selected as locations for these clinics based on higher concentration of international shows and competitive PREs, although other locations will be considered upon request.

Selection for the clinics will be based on the following criteria:

USPRE will underwrite all expenses for the clinic, with the exception of stall rental/board at the facility and individual riders’ personal expenses. 8 riders per clinic.

Deadline to apply for the July Clinic is June 15.