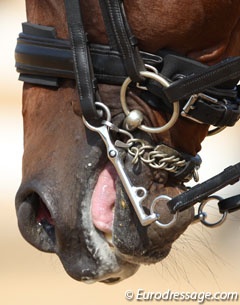 The tightness of nosebands in dressage horses has been a hot topic for the past few years. At the same time as animal welfarists have been complaining to show organisations and the FEI about excessively tight nosebands and wrong use of the bits, researchers have been investigating the matter scientifically and publishing papers on the topic. Paul McGreevy has become the front-runner in this field and now two members of the IDRC - Wayne Channon and Kyra Kyrklund - have joined the debate in light of launching an FEI Safety and Welfare Committee.

In 2016 renowned veterinarian and researcher Paul McGreevy of the Faculty of Veterinary Science at the University of Sydney, co-authored a paper titled "The Effect of Noseband Tightening on Horses’ Behavior, Eye Temperature, and Cardiac Responses". The paper was first published in PLoS ONE on 3 May 2016. It was one of several publications which McGreevy authored on the tightness of the noseband in dressage horses.

Wayne Channon, secretary-general of the International Dressage Riders Club, and Kyra Kyrklund, president of the IDRC, invited Mc Greevy for a discussion on his research as Channon saw flaws in it. "I think it is very worthwhile doing this research, the basic approach was sound and necessarily limited in scope," Channon told Eurodressage. "The disagreement is that the conclusions were unwarranted extrapolations and probably wrong."

To summarize a few of the issues that Channon wanted touch up, the former British team rider listed:

"As an example, the researchers reported an increase in heart-rate when there was no area under the noseband (i.e. it was sung) and suggested that this was a stress related," Channon continued. "The level of heart-rate increase was equivalent to that increase seen in a horse at a gentle walk. Hardly evidence of any kind of distress."

On 26 July 2016, a meeting of dressage riders Channon and Kyrklund and equitation scientists was held at the School of Veterinary Science, University of Bristol. The purpose of the meeting was to discuss recent developments in the science concerning the effects of restrictive nosebands and, more broadly, to consider the merits of an equestrian welfare and safety committee to help guide research initiatives that inform the ethical use of horses in sport. 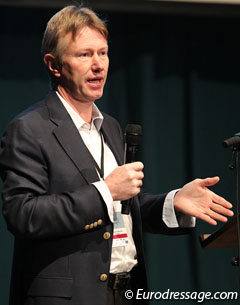 The riders were joined by Dr Orla Doherty and Prof. Paul McGreevy. The meeting was chaired by Emeritus Prof. John Webster, who was joined, towards the end of the meeting, by Prof. Christine Nicol. At the close of the meeting, the attendees decided to release a joint report on their deliberations.

"It was very productive and we covered the main issues.  The conclusion was that we would publish a commentary on our findings," said Channon.

On 9 March 2017 The Veterinary Journal 222 published a paper titled "The use of nosebands in equitation and the merits of an international equestrian welfare and safety committee: A commentary" written by Paul D. McGreevy, Orla Doherty, Wayne Channon, Kyra Kyrklund, and John Webster.

Channon and Kyrklund's goal is to set up an FEI Safety and Welfare Committee.

"Prof McGreevy is concerned about noseband tightness as he has seen many horses that have indents in their nasal bone.  This is indeed a welfare issue.  We need to determine when this damage occurred and stop it at source," said Channon. "The greatest challenge to the future of equestrian sports is losing our Social Licence and underpinning that is ethics and welfare. We will be putting the concept of a dedicated Safety and Welfare Committee to the FEI in the near future.  The first step was to publish this joint commentary."

A few excerpts on the newly published article state:

"Given the reliance equitation places on negative, rather than positive, reinforcement and the need for aversive stimuli, there is increasing interest in the concept of ethical equitation that calls for stress in the ridden horse to be minimised and justified (Jones and McGreevy, 2010; McLean and McGreevy, 2010a, 2010b). Even practices carried out with the most honourable of intentions can be based on aversive stimuli but the onus is on the practitioner to use the minimum levels that are effective and, in any ethical training programme, to replace aversive cues with neutral cues where possible." 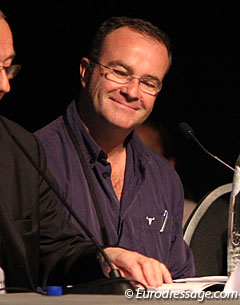 "Devices, such as restrictive nosebands, that may apply pressure but cannot be released by the rider as part of training do not align with negative reinforcement principles and merit particular attention from a horse performance and welfare perceptive. If the noseband is providing constant pressure, then it is not a reinforcer of any kind, as the pressure is not applied or released in response to any behaviour. If the pressure intensifies in response to the horse opening or crossing its jaw, then it is a punishment. If the pressure is relieved in response to the horse relaxing its jaw, then negative reinforcement occurs regardless of whether a human or simple physics is responsible for the relieved pressure."

"It has been argued that dressage could be the flagship for ethical equitation due to its focus on training (McGreevy, 2007, 2011), which is why equitation scientists often focus on this sport (König von Borstel and McGreevy, 2014). That said, with its historic commitment to lightness and harmony, dressage may value attributes of outstanding technique that the Fédération Equestre Internationale (FEI) might struggle to acknowledge and reward across all equestrian disciplines. Unfortunately, the focus of equitation scientists on dressage horses working with their noses behind the vertical and with issues related to the application of pressure in horses’ mouths can leave some members of the dressage community feeling persecuted (Hester, 2012) as they reflect on how unwelcome publicity may affect how the sport is perceived on the world stage."

As a conclusion of the article, the authors wrote: "As rider safety and horse welfare come under closer scrutiny, not least from social media, the merits of an equestrian welfare and safety committee seem clear. The lack of consensus on the impact of restrictive nosebands on horse performance and welfare, as an example of just one piece of equestrian equipment, confirms that need for such an entity. We welcome discourse on its terms of ref- erence and the sources of evidence that would underpin its work."