H1000C to Support Swiss Dressage Team on the Road to Tokyo 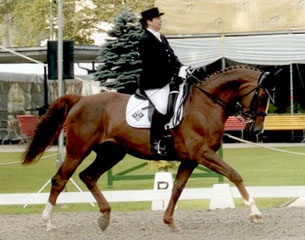 The Kroll family has launched a new project called "H1000C" which will fund and support a Swiss dressage team on the road to the 2020 Olympic Games in Tokyo.

Switzerland hasn't fielded a team at the Olympic Games since. In the last decade the Swiss federation has not exactly been very supportive at fielding a full team at major (inter)continental Championships and most recently Marcela Krinke-Susmelj was the only Swiss individual to get the qualifications and support to represent her country at major events. Switzerland was last represented with a team at the 2004 Olympics.

Kroll wants to see that changed and they presented their H1000C project at the Hofeor riding stable in Eggenwil.

"H1000C wants to pursue the goal of the Swiss Equestrian Federation and Swiss Olympic Committee to send a Swiss dressage team (3 combinations) to the 2020 Olympics in Tokyo," the press release read.

H1000C will be helping the Swiss A-squad and Perspective-squad by financially supporting it. It will enable the riders to particpate in extra trainings, as well as share in their travel expenses for CDI participation.

H1000C is a non-profit foundation, chaired by Franz Häfliger, which will cease to exist on 24 July 2020. Supporters of Swiss dressage can donate 1000 Swiss Francs for membership into this "club" of which the money will go directly to the squad riders' efforts.