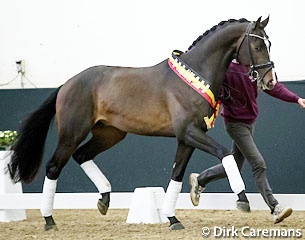 The Dutch bred Ons Noud has been proclaimed dressage champion of the 2017 Belgian Warmblood Stallion Licensing on 17 March 2017. The dark bay stallion was one of four dressage stallions approved for BWP breeding.

The third phase of the 2017 Belgian Warmblood Stallion Licensing took place in Hulsterlo, Belgium. Ons Noud remarkably has a double passport. He is BWP registered but also has a KWPN passport (under the name Joint Edventure S). As he was the sole dressage stallion with BWP documentation of the four approved colts, he got the champion's title almost for free.

Ons Noud is by Firestone (by Johnson x Florencio) out of a Trento B dam and is owned by Stallion station De Roshoeve in partnership with Dutchman Kees van den Oetelaar.

Elton was initially not qualified for the third phase after a disappointing second phase, but he got the chance to re-present himself through a "second-chance" system the BWP offered. Rob van Puijenbroek's 6-year old Genesis was approved as an older stallion after a presentation under saddle. Van Puijenbroek's Jackson (by Apache) did not made the cut.