The FEI Dressage Judges Working Group will be presenting its initial findings on the morning of the second day of the 2017 FEI Sports Forum in Lausanne, Switzerland on 10 - 11 April 2017.

The Group’s discussions, which have lasted for several months, are based on analytical studies of the current judging system and exploring judging systems used in other FEI disciplines, such as Reining and Vaulting.

During the Sports Forum session, Bettina de Rham, FEI Dressage Director and Frank Kemperman, Chair of the FEI Dressage Committee will focus on short-term and long-term solutions to address the issues encountered in Dressage judging, such as lack of transparency, consistency and clarity. The need to introduce a code of points and to concentrate further on education and training of judges across all levels are some of the long-term objectives proposed by the Working Group. The Sports Forum’s delegates feedback on the proposed measures and next steps will further inform the Group’s work.

The Dressage Judging working group representatives will open the discussion on short term and long term solutions proposed to address the issues raised in Dressage judging, which have been identified by media or stakeholders groups as lack of transparency, consistency and clarity.

One of the long term objectives which will be proposed by the DJWG is to concentrate on education and training of judges across all levels and a proposal to introduce a Code of points, which will need to be built with the input of stakeholders’ groups/technical experts. 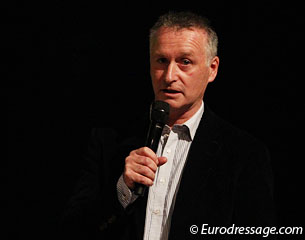 The key elements for recommendation will be explained.

One key area is the revision of the current judging system to give clarity and more transparency to Athletes, Officials, trainers, public and media.

The second key area is the development of modern and up to date education tools for Officials at all levels to ensure fair and open judging at all levels.

The key fundamentals required of a new system have been defined as accuracy, flexibility and being easily adjustable, helping overcome natural biases, being easy to use by existing judges and cost effective to implement at all FEI levels.

The Dressage Judging working group representatives wishes to invite all stakeholders and technical experts to give their input to help build the new systems for judging and education of Officials.