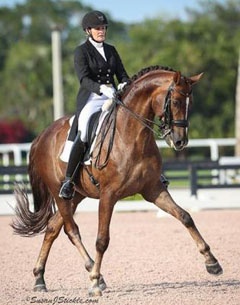 U.S based Canadian Ashley Holzer continues to compete one Grand Prix horse after another even though her last major championship as a Canadian team rider was the 2012 Olympic Games in London. With a solid base of wealthy and loyal clients, Holzer helps them pave their way to be successful at Grand Prix level.

One of Holzer's often applied strategies is for her to introduce her clients' up and coming Grand Prix horses to the CDN and CDI ring first before the students take over. Since 2012 Holzer has been competing no less than 7 (!!) Grand Prix horses at CDI's. They are Breaking Dawn, Degas, Dressed in Black, Jewel's Adelante, Tiva Nana, Unlimited, and Arthur at international Grand Prix level.

Bred by Günther Harms, the chestnut made his show debut in 2010 and competed at the Bundeschampionate with Oliver Luze. In 2011 Eva Möller rode him at the Bundeschampionate and three months later he sold as a 4-year old at the 2011 PSI Auction in Ankum for 500,000 euro to Russian Oleg Efremov. Ukrainian Sergey Puzko competed Sir Caramello as a 5-year old in 2012 at the CDI-YH Zhashkiv in Ukraine. By the autumn of 2012 the horse had moved to Helgstrand's yard in Denmark and won silver at the 2015 Danish Young Horse Championships in Odense. A year and a half ago P.J. Rizvi bought the former licensed stallion as a gelding at Patrik Kittel's yard.

At the 2017 CDN Wellington on 10 - 12 March 2017, Holzer rode the strapping chestnut in his second Grand Prix classes and scored a winning 72.800%.  Holzer debuted the stallion in February, winning the Grand Prix class with him then as well. In America, Sir Caramello is listed as "Sir Carmello" on the score sheets.

"He is such a talent," Holzer said. "I am looking forward to being able to ride this amazing horse in the international ring in the near future. He is so exuberant, and he is just learning to balance and control all of his power. The mistakes he makes are really when he tries too hard."

Holzer said that the gelding is a favorite in the barn. "At home he is a complete sweetheart and loves spending hours in the paddock," she explained. "His barn name is 'Chewy.' He is very spoiled by everyone and is such a kind horse."

Placing second to Holzer in the national Grand Prix was Gloria Schriever (CAN) and Zenith De Pessel, a 2004 KWPN gelding (by Gribaldi x Ronaldo) owned by Schriever, with a score of 70.300%. Schriever discovered Zenith advertised for sale on Eurodressage. Third place was captured by Nichole Suzanne Smith (USA) and Ebikur, a 2001 Oldenburg gelding owned by Patricia Gillian, with 69.000%.

Yvonne Losos De Muniz (DOM) and Aquamarijn, a 2005 KWPN mare (by United x Gribaldi) topped the second Grand Prix class of the show, held on Saturday, with a score of 67.400%. Second place was awarded to Nichole Smith and Ebikur with 61.600%. Third place went to Debbie Hill (USA) and Lord Sisley, a 2004 Oldenburg gelding (by Lord Sinclair x Landadel) with 57.900%.

The National show concluded on Sunday, March 12, with a victory in the Prix St. Georges for Costa Rican Esteban Quiros on Marco Bernal's former Pan Am ride Farewell IV, a 2001 Westfalian gelding (by Fidermark), owned by Theresa Davidson, with a winning score of 70.132%. Second place went to Michele Sizemore (USA) and Carlovingio, a 2004 KWPN gelding owned by Marco Bernal, with 65.526%. Third place was captured by Pamela Davies (USA) and Lagerfeld, a 2003 Westfalian gelding (by Leonidas), with 65.132%.