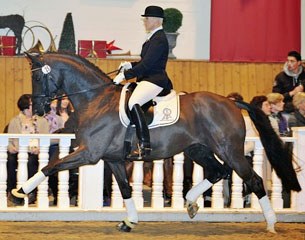 The 5-year old Hanoverian stallion Der Designer (by De Niro x Weltmeyer) broke the one million euro barrier at the prestigious 2011 PSI Auction in Ankum, Germany, on 11 December 2011. The black stallion sold for 1,1 million euro to a Russian buyer and became the top selling horse of the 32nd Performance Sales International, hosted by Paul Schockemohle and Ullrich Kasselmann.

The Russian buyers' table had Russian Grand Prix rider Inessa Poturaeva accompanying them at the auction. The table also included the wife of Sergey Maslov, the president of the Russian Equestrian Federation, who has bought horses at PSI before.

The Performance Sales International proved once again that quality has a price and exactly that quality and prestige of buying at the most exquisite warmblood auction in the world attracts buyers from all over the world.

A Lebanese buyer purchased the most expensive show jumper, the 6-year old bay stallion Chadino (by Chacco Blue) for 700,000 euro.

The 4-year old Oldenburg gelding Siebenstein (by Sir Donnerhall x Diamond Hit) moves to The Netherlands for 500,000 euro.  The same price was paid for Dai Jin (by Don Frederico x Weltmeyer), which moves to David Wilson's barn in the USA.

One of the top horses listed for the auction, the licensed stallion Sarkozy (by Sandro Hit x Weltmeyer) ended up not being offered for sale in the auction.

Boxing star Vladimir Klitschko put up a bidding duel with the Russian Nikolai Aristov and won as the hammer fell at 30,000 euros for the Lewitz Paint yearling that was auctioned off to help the charity “Pink Ribbon, founded to help breast cancer victims.

Paul Schockemoehle was quick to help the losing bidder out of his understandable disappointment – Aristov also received a real live Lewitz paint for his 27,000 euro bid, because Schockemoehle has quite a few at his Lewitz Stud.

Pink Ribbon “Call Me Pink” is an initiative started by Carina Carlsen, who runs the Norwegian dressage portal www.dressursaklart.no and whose mother is suffering with cancer. As is every year, Schockemoehle and Kasselmann use the P.S.I. to support a good cause.