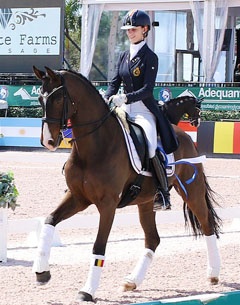 Representing Belgium, 16-year-old Antonia Arl is thrilled about having the opportunity to enjoy Florida’s warm winter season for three weeks. Antonia began her three-week trans-Atlantic trip with her two horses in mid-February to compete in one national weekend competition and two weeks of CDIs and returning home to Belgium on March 8th.

Stabling her horses in Germany not far from her home in Lanaken, Belgium, Antonia escaped freezing temperatures to ride in theAGDF competition series for the second time. Not always easy for Antonia the first week, her horses kept her motivated to keep them relaxed and focused on the task at hand for the higher marks. She succeeded in her plan to develop a sound training system for the two horses in order to solidify their calmness and confidence in the big stadium arena among the atmosphere with 70% scores. “I am so proud of both of them, how they have settled in,” she said proudly. “This has been a shock to them with the weather, the timing, the shows and the noises. Still, they did not let me down in the big stadium. They listened to me and did their thing. We are a good team.”

Their mileage spent in the competition ring will help the young rider gain her own confidence in preparation for the Young Rider division at the European Young Rider Championships taking place at the Equestrian Center “Den Goubergh” in Roosendaal, the Netherlands August 9-13,2017. As one of the youngest in her age divisions who are coming up through the EuropeanYoung Rider system, she joins a number of young riders in Europe who are developing into superstars. 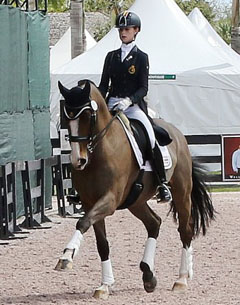 When it comes to Equestricons Duke De Niro, Antonia praises, “Duke is my number one Young Rider horse. I have been riding him for one year and we have become a great match together.Of course, I have the usual struggles with him as he never leaves me alone in a test, as he spooks. But, we learn a little more every day in there.”

Antonia has been riding her second horse Equestricons Belstaff W for one year as well. “With Belstaff, I rode in the Young Rider division last year. Here in Florida, I decided to do the Junior division because I am 16. When we go back to Europe, though, I will ride him in the Young Rider division again. I will have two horses to qualify for the European Championships in the YoungRider division. After that, I will begin training Duke for the U25 division.” She also praises the horse, “I am so lucky to have Belstaff because I can learn so much from him. I think that if I can ride him well I will be able to ride any horse in the future.”

In Florida, the horses are cared for by 22-year-old American Kya Anderson from North Carolina who, for 5 months now, has been working with the Arl family in Germany. Meeting the Arl’s when she was working for Finnish Grand Prix rider and business partner of Jochen Arl, Henri Ruoste, Kya grooms, rides and keeps all five of their horses going, which helps Antonia balance her time between school and riding. In Florida, Kya competed the 6 year old gelding Waitoni (by Wynton x Weltmeyer)and won all the Training Level classes with high scores.

When Antonia left Belgium for her competitions in Florida’s AGDF, it was winter there and snowing. “It was dark there all day,” she described. “When we would start to warm up, I could feel the horses were cold, tight and uncomfortable. It was clear they wanted to stay warm in the stable.” In Florida’s temperate weather, however, “their eyes opened, their ears went up front and they are relaxed and loose. They have been so happy to be outside here.” She smiled at acknowledging her own comfort in SouthFlorida’s climate, “I am happy about the weather here, too. It also gives me energy.”

One week after the horses arrived in Miami, Antonia rode in her first competition in Florida’sAGDF, “We had a bit of a struggle our first few days right after we arrived here. The horses traveled for 5 days including quarantine in Miami. When they came out of quarantine and arrived at the show grounds, I had to jog them to see that they were okay. That first day, it was hard to get them back into the routine because they had so much energy. I felt bad for both of them.” She continued, "I gave them all the trust I have and two days later we showed in the national arena so I could have a chance to practice the tests. I wanted to do one national show before the next week’s CDI.”

“At that first show, Duke was just so crazy. I rode the best I could and I’m not mad at him at all.I totally know it was crazy to do a test so soon after arriving in this weather. I am still really proud of him that we could even do it.” She explained, “It wasn’t the best score. But, without that national competition, I wouldn’t have been able to enter the CDI ring and do as well as we did. I wouldn’t have been as confident in the big stadium arena.” 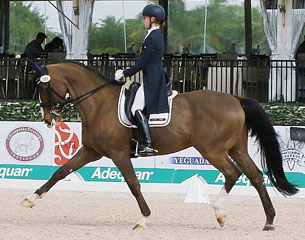 Antonia switched to a high school in Maastricht, Holland. “It’s so cool,” she beamed. “I can make my own schedule for the week, which has been so much better because I can ride more and train better. Before, I could not leave school and riding was only possible three days a week. Now, I can ride 4 to 5 times in a week. This is my last year. In May I take my exams and,hopefully, I will be done with high school.”

Contemplating her training and riding performances more as she gets older, Antonia shared, “Ithink about everything now. When I was younger, I would just ride into the test and never give much thought to it. I would do a half-pass and not really care too much about it.” She added, “I would even sing a song in my head during the test. Because school was so difficult, I only rode three days a week to prepare for the shows. Last year, when I changed schools, I could spend a lot more time at the barn riding, training and concentrating on the connection with my horses.”

She said about showing, “You just have to give your best and see what it will feel like in there and what the results will be.”With great focus and inner drive to pursue the sport,Antonia has done a great job on her three week competition schedule at the Adequan Global DressageFestival competitions in Florida.