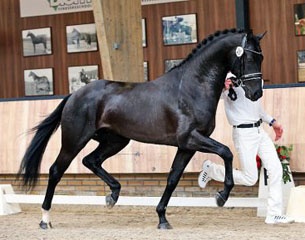 The black D'Joep (by Desperado x Vivaldi) has been named the champion of the 2017 NRPS Stallion Licensing which concluded on Sunday 5 March 2017. D'Joep was named the stallion with the "best Trot" which stands for the licensing champion with the NRPS society.

Fifteen dressage and show jumping bred stallions were accepted for the stallion performance testing as well as eight pony stallions.

Bred by Jurgen van der Meijden and presented by Linda Leeflang, D'Joep was originally named Joep as he is KWPN registered, but as soon as the colts get NRPS licensed status, their names are often adapted to the NRPS system, which follows the German system in which the first letter of the stallion's name will be the same to the first letter of the sire's name. In D'Joep's case the sire is Desperado.