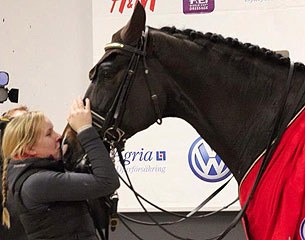 Three dressage personalities - Sara Lord, Lina Dolk and Kyra Kyrklund - were recognized for their contributions to equestrian sport in their country at the 2017 Swedish Riders Gala  in Gothenburg, Sweden, on 22 February 2017.

Tinne Vilhelmson-Silfven's groom Sara Lord was named the Groom of the Year. She has worked for the Swedish Olympic team rider for ten years. She is described as a groom who is "putting the horses' best interests above all and despite her fear for flying, goes everywhere the horses are required, including the Olympics in Rio."

The Finnish born and British based trainer Kyra Kyrklund, who has been actively committed to coaching riders in Sweden, was the recipient of the Year's Special Prize. Jan Brink received the trophy in her name.

The 19-year old Under 25 Grand Prix rider Lina Dolk was named "Comet of the Year" as the biggest shooting star on the Swedish scene in all three Olympic disciplines. This trophy is awarded by the Swedish equestrian magazine Ridsport.

Further winner's plaques were offered to Tinne Vilhelmson-Silfven for dressage as she rode in her 7th Olympics in Rio and finished second at the 2016 World Cup Finals in Gothenburg. Jeanna Hogberg's horse Fiorucci HT (by Florencio x Rubinrot) was named shooting star dressage horse of the year. Under 25 rider Josefin Gyllensward was also named "Star of Tomorrow". She competed at the 2016 European Under 25 Championships.