Rascalino Sold to the U.S.A 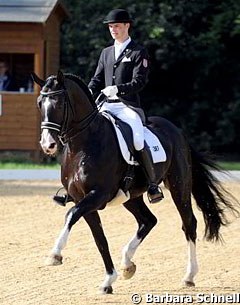 The 16-year old Hanoverian breeding stallion Rascalino has been sold to the U.S.A. The black stallion has moved to Christine Kropf's Hawk Hollow Farm in Erieville, New York.

Rascalino is a 2001 born Hanoverian stallion, bred by Edgar Butt. He is by Rotspon out of Velvet (by Velten Third x World Cup III x Salut).

He was licensed at the 2004 Hanoverian Stalion Licensing and sold to the Celle State Stud. He did his 70-day stallion performance test in November 2004, finishing first overall with an index of 149.29 points. He scored 153.37 points for dressage and 103.56 points for show jumping.  So far he has sired 4 licensed sons (JJ RayBan, Ricardo Star, Royal of Black, Rantanplan) and 15 state premium mares.

In 2011 the Hessian based Josephine Binder took over the ride and in March 2013 the junior rider Johannes Ruhl began competing the black. Ruhl's father Frank also took over ownership of the stallion. The pair's last show together was in May 2013 at M)-evel.

Rascalino's new owner Chris Kropf has been breeding Hanoverian sport horses for over 14 years and is a judge for the American Hanoverian Society. She has competed up to fourth level in dressage and schooled higher, as well as in the hunter-jumper ring.  She acquired Rascalino at the beginning of 2017 and the horse began his journey to the USA on 22 February 2017.