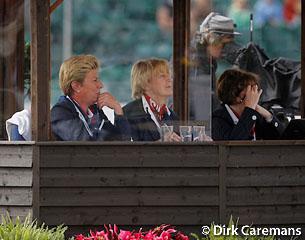 Guest columnist of the week is Hans-Christian Matthiesen, the brand new president of the International Dressage Officials Club (IDOC) and former FEI Dressage Committee Member. In his mission statement right after his appointment as IDOC president, Matthiesen stressed that he's aiming for more communication. The Danish veterinarian puts his words in practice with this column.

All of us dressage judges know the feeling: we just want to be average/in the middle or close enough to the total score so that no one will blame us or accuse us for having made a mistake or judge nationalistic.

Nationalistic judging, a very common concern for many international judges. We all know the feeling and we all are very aware – we always try to be honest and fair to everybody, but never the less we are only humans – and of course, we see things in different perspective also when you are judging a colleague, someone you know or someone from your own country. In my opinion it’s almost never an advantage – it’s almost always a disadvantage because of the fear of not being fair. But never the less, we sometimes see some judges being accused of judging nationalistic.

We there is a case of nationalistic judging in a panel of judges is crucial to talk about it and the differences there might be in the scores. We are obliged to do so. It will be a help for everyone. Support each other and try to find a good solution and conclusion. Be ready to stand up and support the group.

The FEI will react if there is an official complaint. They will contact the parts involved, the judge, the foreign judge (report). Everybody will have a chance to explain and give arguments – if there was a mistake. In the evaluation of a case – there will be used statistics, the scores from the particular show/result – and from the dashboard (statistics pr judge in general and in comparison with other judges and other shows) to see if there is a general tendency towards being nationalistic. The FEI takes judging very seriously and care about all cases and complaints. If there is enough evidence of nationalistic judging, the JSP will be involved as well as the Dressage Committee. One consequence for the judge might be more supervision by the JSP and refresher seminars, new exams etc.

A lot of judges are often accused by their own countries/riders – that they don’t give enough points to them – and ”all the other judges do that” (give higher points to their own riders!)! – and that is very important to have in mind, that many judges fear that – even though we always try to appear and behave professional.

Often judges are under a lot of pressure, remember we are only humans – we try our best – and still we have to accept that mistakes happen – to all of us. But being under constant pressure from riders/trainers/organizers (a sponsor!) and press – to give high marks to country-men and well know riders. It’s not impossible to deal with, we just have to stick to our education, background and experience. Judge what we see in front of us – movement by movement. Remember we are not representing a country – we are international dressage judges. That goes for everybody.