An Investigation into Noseband Tightness Levels on Competition Horses 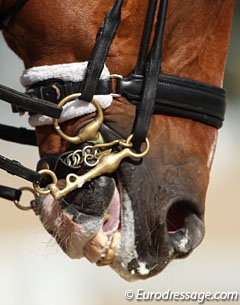 Forty four per cent of nosebands were extremely tight and only 7% were fitted to the recommended tightness level of the equivalent of two fingers. Tight nosebands may cause uncomfortable levels of pressure and pain in horses and are difficult to justify on welfare grounds.

Nosebands are used by riders to prevent the horse from opening its mouth, increase control and, in some cases, to comply with the rules of competition. Compared with standard cavesson nosebands, the crank noseband provides a mechanical advantage of 2, i.e. it doubles the tension for a given force used to tighten it. Possible negative consequences such as discomfort, pain or tissue damage are of concern to equine scientists and the public. 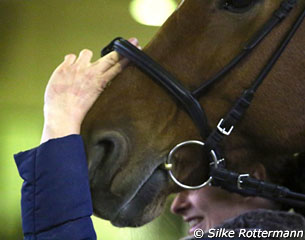 Data were collected immediately before or after the performance. Using the taper gauge as a guide, results were classified according to the number of ‘fingers’ that could fit under the noseband at the nasal planum, and assigned to five groups: 2 fingers; 1.5 fingers; 1 finger; 0.5 fingers or zero fingers. Different tests were applied to compare noseband tightness levels between disciplines and horse age. 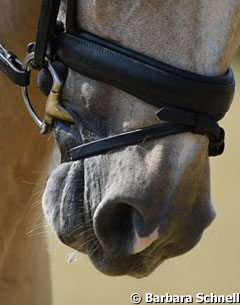 The prevalence of such tight nosebands aligns with the ISES position statement calling for the resumption of noseband checking and should trigger further research into the behavioural and physiological implications of tight noseband usage for horses. The current lack of guidelines and regulations regarding permitted noseband tightness levels permit the use of noseband tightness levels that may be detrimental to horse welfare.