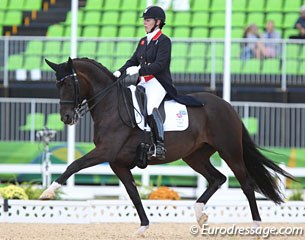 Atterupgaards Orthilia is a 12-year old Danish bred and Oldenburg registered mare by Gribaldi x Donnerschlag. Fiona acquired the dark bay mare in October 2013.  They were members of the silver medal winning British team at the 2015 European Championships in Aachen and 2016 Olympic Games in Rio de Janeiro, Brazil.

"Agnete saw her last year and tried her again in December and they fitted very well together," Bigwood told Eurodressage. "I just don't have the time to compete her as much as she deserves and such a talented horse should be out doing the shows. Having three children and a big building project will take up a lot of my time so I want to have a quieter year bringing on my several younger horses up to Grand Prix. I know that Agnete will give her the best home and she will be very loved."

Fiona and her husband, Danish Olympic team rider Anders Dahl, have recently purchased Brantridge Park in Balcombe, West Sussex, U.K, which needs major renovation and development. Alongside being mum to Mette, Morten and Lars, this will take much of her time.  However, riding is still very much part of her life and she has no plans to retire. 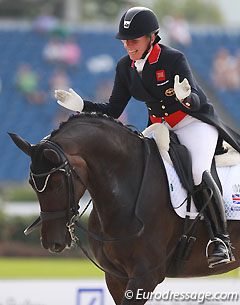 “I love training and competing so my career is far from over," Fiona told British Dressage. "I have some exciting youngsters at home and am currently looking for another so I’m not ready to hang my boots up just yet. My priority is my family and home so while I won’t be out competing at the big internationals for a while, I’ll still be busy at home working on producing a future Olympic champion for Britain.

Due to her busy home commitments, Fiona states she can only do around four top level shows a year. The still young Grand Prix horse Orthilia will continue under Kirk Thinggaard.

"She’s the most talented, generous and clever horse I’ve ever ridden but I know she’ll have the best home and chance of success with Agnete," Bigwood stated.