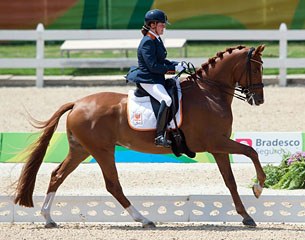 Paralympic gold medal winner Sanne Voets has been named Dutch Equestrian of the Year 2016 based on her golden achievements at the 2016 Rio Olympics. This is the first time that a paralympian claimed Dutch top honour following the absence of medals in the three Olympic disciplines.

The 30-year old Sanne Voets lives in Berghem, The Netherlands, and won kur gold at the 2016 Rio Paralympics aboard Demantur.  The other nominees for the title were carriage drivers Ijsbrand Chardon and the Dutch carriage driving team including Chardon, Koos de Ronde and Theo Timmerman.

The 2016 Olympics were a missed opportunity for the Dutch with none of the riders in any of three Olympic disciplines able to achieve a team or individual medal.