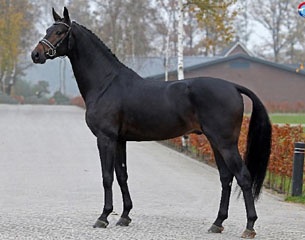 Nagano became the best scoring dressage bred stallion in the 2017 NRPS Stallion Performance Test, which concluded at the KNHS headquarters in Ermelo, The Netherlands, on 14 January 2017.

The NRPS is the second breeding studbook in The Netherlands, which includes ponies as well as horses. They need to have a minimum percentage of 12.5% of Arabian or Anglo Arabian blood to be registered with the the breed society.

The NRPS Stallion Performance Testing is very different from the traditional testings by the major studbooks. Stallions seeking licensing with the NRPS studbook can do their performance test by staying home. In a period of four months, they will travel three times to Ermelo for an assessment.

Fifteen stallions in total participated in the 2016-2017 NRPS testing and all of them passed. Five were dressage bred horses and five were ponies.

The other approved stallions are Excellent (by Everdale x Donnerhall) and Fireball (by Furstenball x San Remo), which are both owned by Van Olst, as well as Jaguar (by Jazz x De Niro) and Ashwin van de Fryochaborg by Andretti x Flemmingh).