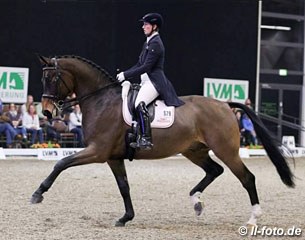 Anabel Balkenhol and her 8-year old Hanoverian gelding Crystal Friendship topped the board in the Prix St Georges for developing PSG horses (aged 7 - 9) at the 2017 CDN Munster Indoor national dressage competition on Friday 13 January 2017. The pair scored 73.333% for the victory in a field of 16 competitors.

The massive bay gelding Crystal Friendship (by Fidertanz x De Vito) is from a famous breeding line. He is the full brother to the licensed Foundation, while his full sister Fire and Ice just gave birth to a Quaterback colt at her owner Dr Jorga da Rocha's stable in Sao Paulo, Brazil, three days ago. The Balkenhols acquired the horse together with Brazilian Eduardo Bundyra for 200,000 euro at the 2013 Hanoverian Autumn Elite Auction and renamed the horse from Friemel into Crystal Friendship. Anabel has been riding the horse since then under the supervision of her father Klaus. The horse showed great promise in trot and produced big sweeping tempi changes, but the horse swayed much in the hindquarters in the ones to the right.  They scored 73.333% for the trophy.

"Wow wow wow," says Balkenhol after her victory. "Incredible that big Fritz wins his first St. Georges. It is an incredible feeling, when this horse starts to move. I'm outrageously happy and now he doesn't have to do the Inter I. That would have been a bit too soon."

Sixteen horses contested the Prix St Georges. The overall quality of the horses was high, but it showed that they were were developing Prix St Georges horses. The talent was there, but the finish and polish in the test not yet. Many struggled, for instance, to keep the elasticity in the back in the collected walk and became lateral before the turns on the haunches. 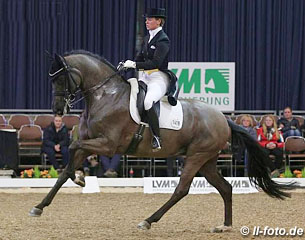 Kira Wulferding and the 8-year old Oldenburg beauty Soiree d'Amour (by San Amour x Latimer). The mare paddle much, and even more with the right front leg but the side silhouette is super elegant. The trot extensions were very ground covering, but slightly hurried. The trot tour was expressive, but in walk she could have stretched a bit more over the back  so that the clarity in the rhythm stayed purer. In the extension it was better. Soiree d'Amour showed a good willingness to work in canter, but the balance in the pirouettes and overal self carriage were not fully there yet. The tempi changes had scope though.

The class offered numerous interesting horses who were not yet able to clock high scores, but still showed promise. Furthermore, Munster is always interesting to see which new horses top riders have in training.

Nadine Capellmann presented her newest acquisition, Look at Me (by Licotus), a strapping black gelding with four socks. He has very lightfooted, elegant gaits but gets tight behind. The horse was quite spooky and impressed by the arena so the forward swing and relaxation over the back could have been better. The extended walk was outstanding. The pirouettes lacked some bending and the communication in the tempi changes every three strides did not properly come through yet. Still the horse is very appealing to the eye and it will be great to see him develop. 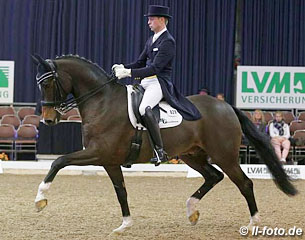 Jan Dirk Giesselmann and his 9-year old home bred Hanoverian First Connection (by First Dance x Royal Diamond) showed much maturity and balance in the trot work even though his was more supple and elastic on the left lead. In the collected walk there was a hesitation in the rhythm and the walk pirouettes lacked impulsion. The tempi changes were well established.

Helen Langehanenberg finished fourth on the 8-year old Hanoverian mare Brisbane FE (by Belissimo M x Furst Heinrich). The pair was first to go and scored 71.535%. Helen also rode the very refined 8-year old Westfalian mare Dark Sugar (by Damon Hill x Sandro Hit x Laurentianer). The black is a very graceful mover but clearly shows more activity and flexion in the hock with the right hind leg. It was even more pronounced in the trot extensions in which she became wide behind. The mare was very forward thinking thinking and co-operative. The extended walk had much ground cover, but the V-moment could be more extended. The canter half pirouettes need to be more established though but the tempi changes worked out fine. 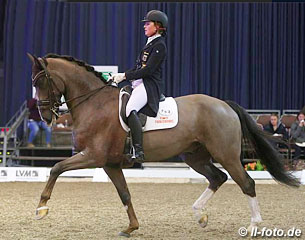 German Under 25 team gold medal winner Florine Kienbaum presented her lovely 8-year old Rhinelander Dorincourt (by Diamont Hit x Florestan) who showed very good self carriage and uphill tendency in the trot work. Brigitte Wittig, on the other hand, had a bit of a tough ride on Christian Heinrich's Bounty (by Bertoli W x Donnerhall). The bay gelding was very spooky and not really in front of the leg, even though he kept the poll nicely as highest point. The entire ride looked ring rusty and green.