Graves, Verdades Nominated for 2016 U.S. Rider and Horse of the Year 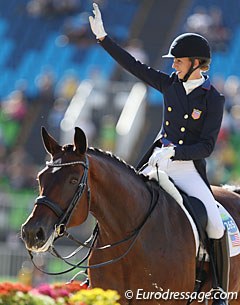 Laura Graves and her Dutch warmblood gelding Verdades have been nominated for the 2016 USEF Rider and Horse of the Year Award. The award recipients, based on a voting system, will be proclaimed 13 January 2017 At the Pegasus Awards gala.

Nine American equestrian athletes have been nominated for the biggest USEF award of the year: Equestrian of the Year. The the William C Steinkraus Trophy is handed to the best athlete in one of three Olympic disciplines. This year only two athletes have been nominated for the trophy: dressage Olympian Laura Graves and Olympic eventer Philip Dutton. The other seven athletes come from non Olympic discplines such as show riding, western pleasure, hunter jumpers, etc.

The United States Equestrian Federation Pegasus Awards are a celebration of individuals who have made a unique impact on the horse world. Presented at the USEF Annual Meeting Gala held each January these awards give each recipient the distinctive honor of being one of the best in their field. The Pegasus Awards include a wide range distinctive honors, including awards for breeder of the year to Junior equestrian of the Year, and all culminating with the Lifetime Achievement Award.