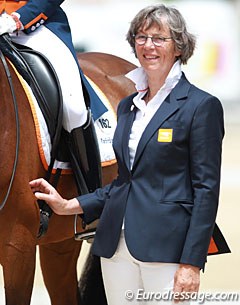 Tineke Bartels has resigned as Dutch team trainer for the pony, junior and young riders on 20 December 2016. The 65-year old Bartels has been 11 years on the job.

Tineke Bartels believes now the time has come to pass on the torch. "I've had a wonderful time as team trainer, but now it's time for the next generation to take over."

Bartels (née De Vries) has been a member of the Dutch Olympic team at the 1992 and 1996 Olympics in Barcelona and Atlanta.

"It was great to work with all these talented youth riders, ponies and horses and of course I cherish all the medals we've won," said Bartels. "Now it's time for a new phase. At home at Bartels' Academy I'm working full time with riders and horses and I hope to continue that for a long time."

The Dutch Equestrian Federation will announce her substitute shortly.