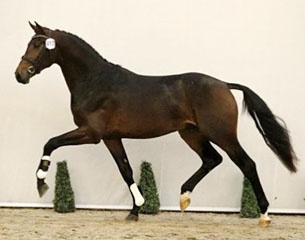 Five colts out of 25 entered for the late pre-selection day on 12 December 2016 in Ermelo were accepted to attend the second phase at the 2017 KWPN Stallion Licensing in February.

The late pre-selection is a special day for those colts who couldn't make it on the normal pre-selection due to various reasons. It was their final chance to get assessed by the licensing committee in the hopes of being accepted for the second phase of the 2017 KWPN Stallion Licensing.

Five colts got a green card and the complete collection of dressage bred colts for the 2017 licensing now includes 97 stallions.

"We were able to stay in line with the first days. It's not a big crop but a good addition to the collection," said Bert Ruttern, chair of the licensing committee, about the five selected stallions. "Also when it comes to blood diversity we were able to invite interesting stallions."

The five colts who passed the late pre-selection are: