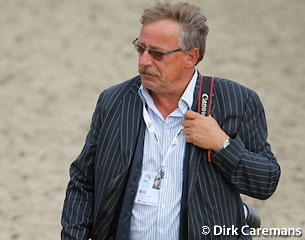 Our guest columnist of this week is Jacob Melissen, Dutch equestrian photographer, journalist and founding member of Springpaard Fonds Nederland (SFN). He runs his own blog on Heel Holland Hinnikt with a strong Dutch focus on his posts, but regularly he crosses borders and touches upon the sore sports in equestrian sport. Melissen recently wrote down his objection to the new 2020 Olympic format.

They are blissfully unaware, the 96 country delagates that voted this past Tuesday in favour of the FEI proposal to reduce Olympic national teams from 4 to 3 athletes. I believe they signed the death warrant of the equestrian sport as an Olympic discipline.

This decision could only be justified if the amount of countries entering the Olympic ring would be contained to 13 nations in eventing, 11 in dressage and 15 in show jumping. But to my surprise the amount of nations will actually be increased.

In show jumping no less than 20 teams will start. This even though the annual finale of the Nations Cup in Barcelona clearly shows the significant difference in quality between the global top and countries which are only able to compete, often with little success, thanks to an immense amount of money.

The same can be said for dressage. With all due respect to Frank Kemperman, but his solution to work with heats will not solve the fundamental unattractiveness of too many riders of an insufficient level. Let’s be honest: dressage is only thrilling to watch when the final 12 start in the Grand Prix, Grand Prix Special or Freestyle. Al those combinations that can hardly complete a lead change are barely worth viewing, but they will become the main event.

If the FEI had wanted to make a change for dressage, they should have organised 3 events leading up to the Olympics. Only the best 12 riders would then be allowed to actually compete to fight for the highest honorary metal. That would have been the exemplification of top sport.

Ingmar de Vos, chairman of the FEI, motivated the decision by claiming that “[The FEI] needs to increase the number of participating nations at the Olympic Games, but within our existing quota of 200. Reducing team members to three per nation was probably the only way to boost the number of flags.” He is absolutely right of course, but the increase in flags will also increase the amount of ‘Eddie the Eagles’ in the equestrian sport with over a third.

It leaves a sour taste in my mouth that a lot of the countries with the most amount of Eddie’s have chosen in favour of the resolution. Not because they know what they are talking about, but because they now have hopes of going to Japan in 4 years so that they can be the proud Eddie who will be leaving the Grand Prix ring with a score of 59% or with 28 penalties in showjumping or by landing their horses in the middle of a cross obstacle.

An equestrian nation like Canada somehow voted in favour, now leading to upheavel between their top athletes and the national equestrian federation. Eric Lamaze has voiced his disapproval over the decision to World of Showjumping: “It is hard to get all of the riders to agree on something, but on this point the riders in Rio were unanimous; we were all against it. (…) I accept the fact that our vote would not have changed the outcome, but we made a decision and believe our voices should be heard. For the Canadian federation to change its vote without notifying or consulting the athletes is wrong, in my opinion.”

By signing the resolution, I believe Tokio has become the cemetery on which the Olympic aspirations of the equestrian sport has been buried. The quality of the competitors should be leading, but quantity has proven superior in the minds of the many.

The Olympic credo ‘competing is more important than winning’ is the ultimate athlete’s lie. However, the FEI representatives voting in favour of the resolution have other things on their mind than guaranteeing the quality of the biggest and most prestigious sporting event of the planet.