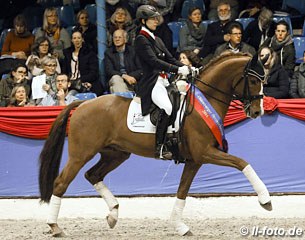 Sir Heinrich OLD has been honoured with the VTV Stallion of the Year title at the 2016 Oldenburg Stallion Licensing in Vechta, Germany, on Saturday 19 November 2016.

Sir Heinrich OLD, born 2008, by Sir Donnerhall I out of C'est Bon (by Fürst Heinrich - Rubinstein I), bred by Paul Wendeln from Garrel and owned by the Westfalian State Stud in Warendorf, was crowned Oldenburg VTV Dressage Stallion of the Year 2016.

Sir Heinrich OLD has two very successful sisters, Cindy OLD and Candy OLD. All three are, of course, by Sir Donnerhall I x Fürst Heinrich -x Rubinstein I and from the exceedingly successful Cinderella mare line. This year, in Rastede’s Schlosspark, Candy OLD not only took the Champion Mare title but also the Regional Young Horse Champion title in the riding horse class. Her sister Cindy OLD was the 2013 Bundeschampion as a 4-year old riding horse and the 2012 Reserve Champion Mare in Rastede’s Brillantring.