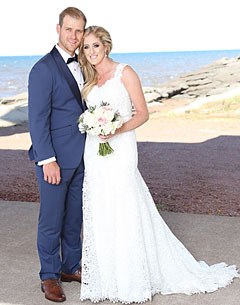 Canadian 2015 Pan American Games team silver medalist Brittany Fraser married her long-time partner, Marc-Andre Beaulieu on 3 September 2016. “We met through friends in Ottawa, ON and I was very lucky to find someone who took an interest in horses like Marc did,” said Brittany. “I have been with Marc since September 2010, and we got engaged in October 2015.”

The wedding, which took place at Fox Harb’r Resort in Wallace, NS, was a ‘who’s who’ of the Canadian dressage world. “I had a very horsey wedding party,” said Brittany, explaining that she even chose her wedding date to align with a non-horse show weekend. “Most of my bridesmaids compete and horses are a huge part of their life, so making sure there were no major riding events (on the weekend of my wedding) was very important to me.” Taking on the MC duties for the night was Brittany’s Pan Am teammate, Chris von Martels, along with Canadian Olympian dressage rider, Jacqueline Brooks. Canadian dressage stars were also among the wedding guests, including Ashley Holzer and Jill Irving.

Horses.nl reported that the 4-year old KWPN licensed stallions Gyon and Gin Tonic have both been castrated. Gyon (by Charmeur x Jetset D) is owned by Nico Witte and Tim & Leida Collins, and he scored 78.5 points in his stallion performance test. Gin Tonic (by Breezer x Special D), who is owned by J. Dijk, Jan Greve and Danielle Heijkoop, scored 79 points in the testing. 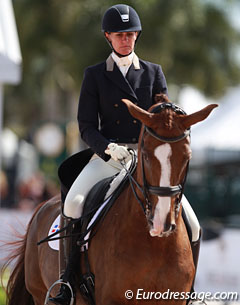 Yvonne Losos de Muniz, the Olympic individual dressage rider for the Dominican Republic, has retired her 16-year old Grand Prix horse Dondolo Las Marismas (by Don Schufro x Romancier) to the field. Losos de Muniz discovered the liver chestnut Danish warmblood as a four year old at Blue Hors Stud in Denmark and trained him from novice to Grand Prix level. THey were the silver medalists at the 2010 Caribbean Championships and they finished 11th in the 2011 Pan American Games. The pair competed at Grand Prix level from 2011 till 2016. He also carried American Hannah Bressler Jacques to Under 25 level in 2015. "He's also been a patient schoolmaster to my daughter and countless of my students," said Yvonne. "What better way to thank this amazing horse than by sending him off to enjoy endless grass and freedom while he's still sound, fit and happy?" The gelding will spend his retirement in the field at Yvonne's parental yard in Canada.

The Swedish dressage team pony Roman has been sold to the 13-year old Swedish pony rider, Siri Ehrnrooth. Under Ebba Nilsson the bay 10-year old Dutch sport pony Roman (by Orchard Red Prince x Vitano) competed internationally in 2015 and 2016 and they finished 27th at the 2016 European Pony Championships in Vilhelmsborg. Ehrnrooth was fourth at the 2016 Swedish Pony Championships aboard her smaller pony Ollies Felix.

The Rothenberger family acquired a new horse for their oldest daughter, Sanneke Rothenberger, the 2016 European Under 25 Championships. Sven Rothenberger bought the 6-year old Oldenburg bred Sankt Anton (by San Amour x Ruhmann), who is bred by Ralf Suhr and previously owned by Regina Koop. Under Franziska Zamek the horse competed up to M-level. 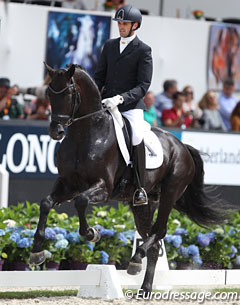 Horses.nl reported that after four years on the job Benjamin Maljaars has left stallion station Van Olst to become an assistant trainer at Laurens van Lieren's yard. Maljaars competed the stallion Glamourdale, amongst others. After Severo Jurado Lopez left Van Olst to work at Andreas Helgstrand's place, Maljaars climbed the ladder to the top spot. He now cited "ready for a change" as reason for his departure.

Bibi van Berkel's Dutch young rider's team horse Nistria Utopia has passed away at age 21. The KWPN mare was bred by G. Fiske and was by Inferno out of Grace Utopia (by Troubadour). With Van Berkel she won team silver and finished 8th at the 2004 European Junior Riders Championships. They competed internationally from 2003 till 2005, but on a national level contested major events at young riders' level until 2007. Van Berkel's 2005 CDI shows were her last international appearance. The mare collapsed on their final hack out on the beach on Sunday 13 November.