Wittmack Roye and Rocher Inducted into the USDF Hall of Fame 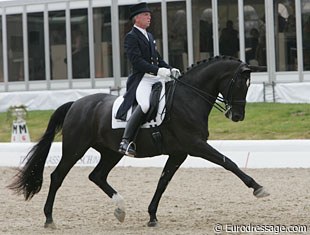 Lilian Wittmack Roye and Rocher will be inducted into the Roemer Foundation/USDF Hall of Fame (HOF) at the Salute Gala and Annual Awards Banquet, on December 3, 2016, during the USDF Annual Convention in St. Louis, MO.

Induction into the HOF is an honor bestowed on individuals and horses that have made outstanding contributions to dressage in the United States.

Rocher is a dressage icon in the United States, for those that witnessed her in competition before her retirement in 2009. Owned by Charles and Joann Smith, of Richwood, OH, this German born 25-year-old Westfalian mare (by Rolls Royce and out of Fraenzi) touts a long and successful competition record, including 59 Grand Prix tests on file with USDF. In 2002, Rocher, and rider George Williams, played to the crowds winning the Grand Prix Freestyle at Dressage at Devon as well as the Grand Prix for the Region 2 Championships. In 2003, Rocher added international competition to her repertoire, finishing fifth in the FEI World Cup Freestyle. That same year, Rocher was named the USDF Grand Prix and Grand Prix Freestyle Horse of the Year, as well as The Chronicle of the Horse Dressage Horse of the Year.

Rocher competed extensively across Europe, in Oldenburg, Munich, Goteborg, Hagen, and Wiesbaden with George on board and showing off her floppy ears and flashy extended trot. She was poised to be a strong contender for the 2004 Olympic Games, but was temporarily sidelined by tendonitis as the event drew near. In 2005, Rocher returned to competition sweeping all three classes of the USEF Grand Prix Championship, as well a putting in a valiant and crowd pleasing performance for the US Team in Aachen, Germany. Rocher moved on to break records, by being the first horse to win the Grand Prix Freestyle at Dressage at Devon three times. Rocher had a long and impressive showing career, but it is her character and inspirational performances that truly set her apart.

Her owner Charles once said "Rocher took a dream and made it a reality. She took us all over the world and filled us with pride. She has incredible character and inspired her fans wherever she showed."

Lilian Wittmack Roye was instrumental in the development of dressage in the US, after coming to this country from Denmark at the close of WWII, on a visa allowing her to work as a performer in show business. Lilian trained her horses in dressage, and was already giving small demonstrations when she signed a one-year contract with the Ringling Bros. and Barnum & Bailey Circus. She spent time practicing her routine at the circus' headquarters in Sarasota, FL, and then logged 20,000 miles traveling with the circus and performing with her horses in the coveted center ring. Lilian then settled in York, PA, building the area's first indoor arena and founding Bri-Mar Stables.

After hosting a few unrecognized shows, Lilian organized the first American Horse Shows Association (AHSA) recognized dressage show held in the US in 1955; hosting riders from Canada to Michigan. She hand-wrote all of the tests, which she translated from Danish, and judged the show herself. In February of 1958, Lilian founded the International Equestrian Organization (IEO); USDF's oldest established and charter Group Member Organization. Lilian was instrumental in IEO establishing their first recognized dressage show. In 1976, the club produced another milestone: the first FEI-sanctioned dressage competition in the US, held at the York Fairgrounds. The current success of dressage competition in the US is a direct result of Lilian's efforts in growing the sport.

USDF Historical Recognition Committee Chair Bettina Longaker says, "Every now and then a gem is found, Lilian Wittmack Roye is one. She held dressage shows in the 1950s, when the civilians were just starting to take over the sport and not many people knew what the word meant, much less how to hold a formal dressage show. Lilian is truly one of our founding mothers, and it is an honor to have her inducted into the Roemer Foundation/ USDF Hall of Fame."