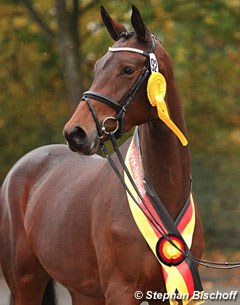 State premium mare Kosima (by Schwarzgold x Oliver Twist) has been proclaimed the 2016 Trakehner Mare Champion at the annual stallion licensing in Neumunster, Germany, on 22 October 2016.

Elegant and strong of movement, the daughter of Schwarzgold out of Kontadina by Oliver Twist impressed the committee with charm, three fantastic gaits, grace and exceptional physique. “A dream mare”, was the verdict of Dr. Matthias Görbert (Moritzburg), Matthias Werner and Joop van Uytert, who were responsible for selecting the champion mare for 2016.

Breeder of this noble mare is Alexandra countess Dohna from Bispingen, one of the most experienced Trakehner breeders. She also owns the mare, together with American Margaret McGregor. During the presentation ceremony, Countess Dohna was awarded the gold medal of the German Equestrian Federation for outstanding achievements in the field of horse breeding. The award was presented by FN board member Petra Wilm. 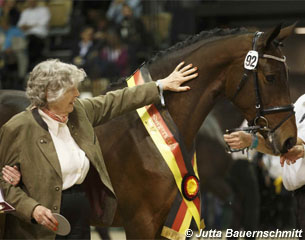 Reserve champion was Esperia (by Schwarzgold out of Espritta by Schwadroneur). “In the end it was Kosima’s slightly superior walk that made her clinched the title," said Joop van Uytert. Esperia impressed with her movement, and was very very good in the trot - continued Uytert. Esperia is the champion mare for the Bavarian breeding region, and is bred by Dane Erik Jörgensen. She is owned by Austrian Dominik Hartl, who was delighted with the result.

Third placed was state premium mare Herbstlicht (by Ovaro x Schiffon). Herbstlicht is already champion mare for the Schleswig Holstein/Hamburg breeding region and is bred and owned by Hof Heitholm in Melsdorf.