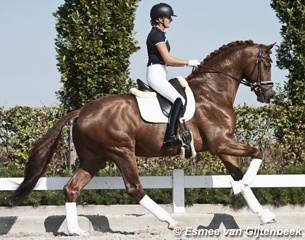 Bred by Luc Boogert, Ibiza was the top selling foal at the 2013 Midden-Nederland KWPN Foal Auction.  The chestnut was a last minute wild card addition to the auction collection at the time and stallion owner Jan Vink acquired it for a top price of 72,000 euro, the second highest price ever paid for a foal at a Dutch foal auction at the time.

Ibiza was licensed at the 2015 Oldenburg Stallion licensing in Vechta and presented there by Dutch horse dealers Ad Valk and Eugene Reesink. He sold for 170,000 euro at the auction, but was bought back by to the owners, who sold the stallion privately to Vasco Janke from Jesteburg, Germany, a few hours later.

Ibiza did his Stallion Performance Test in Adelheidsdorf in the spring of 2016. He was later approved for Hanoverian breeding, but is not licensed with its own KWPN society.

The horse has now moved in training with Emmelie Scholtens who aims at competing him in the 2017 Pavo Cup.

"Ibiza is here now for a few weeks. He is really a fun and good horse," Emmelie Scholtens told Eurodressagfe. "Ibiza was owned by Ad Valk so the owner contact him for training."