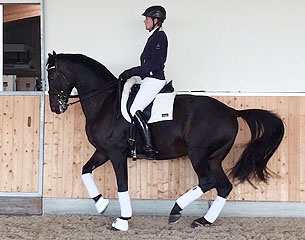 The Davis family's U.S. Young Horse medal winners Fiderhit OLD and Simply Nymphenburg have spent the year in Europe in training with accomplished riders Anna Blomgren and Henri Ruoste to get trained to Grand Prix level. The elegant mare Fiderhit will now continue her show career under Barbara Davis at the 2017 Global Dressage Festival in Wellington, Florida, while the powerful Simply will be any ambitious Grand Prix rider's dream for the future.

Following the recommendation of close friend Jochen Arl, Michael Davis had his two horses shipped from the U.SA. to Europe in 2015 to take them to the next level. Michael Davis' daughter Barbara is the 2015 North American junior riders kur gold medal winner and the 2016 U.S. Young Riders Champion. She is now ready to make a successful and smooth transition to under 25 level. Davis acquired the two talented young horses in Europe in 2012 as FEI level prospects.

Simply Nymphenburg, a 10-year old Hanoverian gelding (by Sir Donnerhall I x Weltmeyer), made his first claim to fame as a 5-year old in Germany, earning bronze at the 2011 Bundeschampionate in Warendorf. He was reserve champion at the 2012 U.S. Young Horse Championships and won the 6-year old classes at the 2012 CDI-W Devon. The horse made its international small tour debut in Wellington, Florida in 2015, after which he moved to Henri Ruoste's yard Gut Bertingloh in Menden, Germany, for Grand Prix level training. Henri competed Simply once at small tour level at the CDI Deauville in July 2015 and scored strong 69.816% and 69.026% marks. Since then the Finnish team rider has been establishing the Grand Prix movements on the powerful mover and the pair will soon make its show debut at Grand Prix level in Europe.

"He's an all-over strong horse with real highlights for the highly collected movements," said Ruoste. "He has a great mechanic for collection." 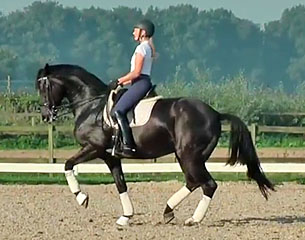 Fiderhit OLD is an 8-year old Oldenburg mare by Fidertanz x Sandro Hit. She won the bronze medal at the 2013 and 2014 U.S. Young Horse Championships. The talented mare was shipped to Europe in  2015 and in the capable hands of Anna Blomgren she has blossomed into a fantastic rising Grand Prix horse which will give  Barbara Davis hope and perspective on 2020 as her upcoming Grand Prix mount.

Swedish Anna Blomgren and her Australian husband and natural horsemanship trainer Will Rogers are based in Nijmeghen, The Netherlands. They run a small private dressage yard where they focus on the training of young, sensitive horses up to Grand Prix. Blomgren has been thrilled to take Fiderhit to the highest level as Davis' future Under 25 horse.

"Fiderhit loves to work. She is a sensitive mare with lots of energy," said Blomgren about 'Fanta'. "You need patience and creativity as a rider, but I love it! That's what really can make a Grand Prix horse brilliant in the end."