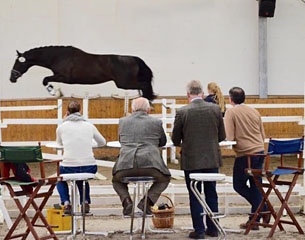 Lemercier and Titolas were the highest scoring stallions at the September editions of the 2016 14-day Stallion Performance Testings in Adelheidsdorf and Schlieckau.

The show jumping bred stallions gathered in Adelheidsdorf, the dressage bred ones were tested in Schlieckau.

Remarkably a dressage bred stallion won the jumper 14-day testing in Adelheidsdorf in which 22 stallions performed. The Baden Wurttemberger bred Lemercier scored the highest mark overall of the 3-year olds. Bred by Gebhard Geiger and owned by state stud Marbach, Lemercier is by Lemberger (by Locklsey II) out of First Lady (by Furst Heinrich x Latus II). He scored 8.75 overall for the victory and also led in the dressage score.  The second highest scoring stallion was the Redefin owned Cellestial offspring, who scored an overall of 8.45.

Thirty stallions gathered for the Schlieckau September testing and Titolas (by Totilas x Stedinger x Rosentau) scored the highest mark of 8.28 points overall. Bred by Susanne Krohn, the 4-year old Hanoverian scored an 8.15 for dressage. The highest dressage score was achieved by Bundeschampion Don Martillo (by Don Juan de Hus x Benetton Dream) who got an overall total of 8.08, but earned 9.19 for dressage. Don Martillo is not yet approved for breeding but with a successful performance test that will soon happen.