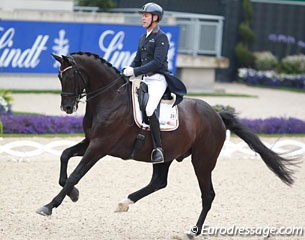 Mario van Orshaegen is a long-time member of the Belgian Grand Prix B-squad aboard Wilco V, a 13-year old Dutch warmblood gelding, bred by P. Verdellen, and sired by Rousseau out of Cavita V Z (by Centauer Z). Van Orshaegen trained the tall and athletic black gelding from novice to Grand Prix level and extensively competed the horse throughout Europe.

The Belgian duo made its international Grand Prix debut at the 2012 CDI Pompadour and also contested Vierzon, Leudelange, Biarritz, Oldenburg, Salzburg and Mechelen that same year. The strong Wilco V was extensively competed and did no less than 81 international classes in his career so far alongside several national shows. For five years van Orshaegen showed Wilco V at numerous high profile competitions such as Hagen, Rotterdam,  and the World cup qualifier in Stockholm. Their last show together was the CDIO Aachen in July.

Wilco V has been sold to Hiachi Fujisawa through a Dutch horse dealer. "He came to me with people from the Japanese federation," said van Orshaegen. "QC Runaldo will now become my number one and I will start competing him at Grand Prix this year. But first a holiday." The 9-year old Oldenburg bred QC Runaldo (by Rubin Cortes x Aletto) is co-owned by Patrick d'Eer and Van Orshaegen. The duo made its international show debut at small tour level at the CDI Compiegne in June.

Long-time Japanese team member Yuko Kitai sold her 16-year old Oldenburg gelding Don Lorean (by Don Larino x Rouletto) to a student of hers in Japan. The dark bay gelding was initially trained to Grand Prix level by Fiona Bigwood and Anders Dahl. The horse then went to Andreas Helgstrand to be sold and was bought acquired by Spanish Alexandra Barbancon who rode him in the Under 25 and senior Grand Prix from 2013 till 2015. Yuko's parent Osamu Kitai acquired Don Lorean from the Barbançon family.

Kitai and Don Lorean were one of Japan's most consistently scoring combinations this year. They showed in Roosendaal, Drachten, Stadl Paura, Mannheim, Wiesbaden and Aachen before representing Japan at the 2016 Olympic Games in Rio, where they finished 48th with 67.271% in the Grand Prix.