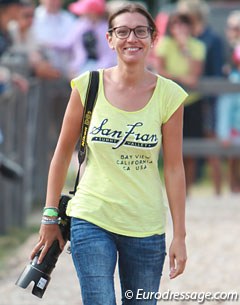 Guest columnist of the week is Dr. Selene Scarsi. A dressage rider and owner, Selene Scarsi teaches English Medieval and Renaissance literature at Kingston University London, and also works as a journalist for Horse&Hound. She has collaborated with Eurodressage for a number of years.

A recent blog authored by Camilla Swift for the British mainstream weekly The Spectator lauded equestrianism for being “a beacon of gender equality,” the “one sport in which a little girl who might never beat the boys on the school cross country running course can, if she focuses and practises hard enough, succeed by getting the fastest clear round showjumping.” The piece was accompanied by a picture of the British silver medallists on the Rio podium, a team composed of two men and two women – barely noticeable and almost a given for seasoned dressage fans, but, arguably, a pretty engaging and visually-arresting image for any non-horsey readers of the magazine.

There certainly are other sports that may produce comparable images: mixed doubles in tennis or badminton, for instance, or sailing, or ice skating at the Winter Olympics; but as far as I know, the three equestrian disciplines are the only Olympic sports where men and women, as well as competing together as part of ‘mixed’ team events, compete against one another in the individual events. (In those few other non-Olympic sports where there is no separate division for women, such as Formula 1 racing for example, women’s presence is so rare as to be exceptional.) 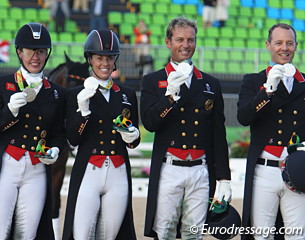 We are all, collectively as dressage and horse sports fans, constantly trying to raise the profile of our sport – which is ultimately a euphemism for finding ways for the three disciplines not to disappear from the Olympic roster – and I firmly believe that gender equality is equestrianism’s biggest unique selling point, and one of the least exploited, but potentially game-changing, features of the sport. The IOC, like many other global sports organisations such as FIFA, is actively trying to stimulate women’s involvement in sport by creating more participation opportunities at the Games, and says it aims to achieve 50% female participation by 2020. With equestrianism, and dressage in particular, the battle is practically already won before it has even commenced; one only has to look at the average dressage show anywhere in Europe to see that, especially at grassroots level, in terms of bare numbers the discipline is overwhelmingly female. Even in the upper echelons of the sport, women’s presence far outweighs that of men: if we look at the current FEI rankings for dressage (31 August 2016), for instance, we see that out of the top-ranked 200 combinations the vast majority (141) are made up of female riders, with the highest-ranked male rider, Steffen Peters, occupying sixth position.

When the IOC produced the Olympic Agenda 2020, a 108-page document completed post-London 2012 and listing 40 strategic recommendations for the future of the Olympics, it included one section specifically devoted to “fostering gender equality”, which both advocates an increase in female athletes in sport, and encourages the inclusion of mixed-gender team events. The fact that not only does equestrianism already do the latter, but it is the only sport where male and female athletes (both human and equine) compete against one another performing the very same movements, needs to be stressed far more frequently. There are no ‘easy’ options for the girls: they don’t get to miss out on the piaffe because they are the fairer sex, nor do the boys have to do triple pirouettes because they are male. Incidentally, we shouldn’t worry that this lack of gender differentiation (which extends to sportswear for competition, unisex and identical for men and women, the only nod to gender difference represented by the fact that the men can take their top hats off to salute – and even that will soon disappear as more and more riders choose to wear helmets) might detract from the perception of equestrianism as a ‘real sport’: there is no question that dressage is a physically demanding endeavour and that riders need to be as much athletes as their horses, but the gap in physical strength between man and woman, relative to a horse’s strength, is negligible – and of course, it goes without saying that there is no room for brute force in the dressage arena anyway. Our elite athletes combine athleticism and concentration – dressage is a sport of the mind as much as it is a sport of the body –; but this level playing field, and the uniqueness of it, is a wonderful advertisement for the Olympic spirit and, on reflection, one that, one would hope, the IOC would not want to give up on. 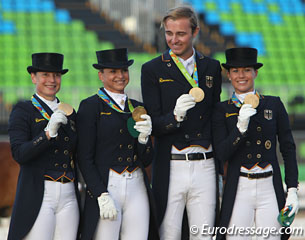 Dressage in particular is often accused of being too elitist and not sufficiently inclusive to be an Olympic sport, but ‘inclusivity’ does not necessarily have to mean ‘globally practiced’: it can also refer to gender or age (indeed, another unique selling point for the discipline, and another discussion point worth investing in), and if we concentrate on this particular shade of the term, dressage’s position in the Games will be less fragile than is usually feared. I wish for the FEI to make more of this in their marketing campaigns: let’s leave behind those posters of dubious taste and little meaning, with horses waiting for luggage at airports or, worse, seemingly drowning in synchronised swimming pools, and, instead, let’s raise awareness that the otherwise brilliant motto #TwoHearts is precisely that: just two, two ungendered hearts. Let’s focus on the empowering message of gender equality – a message that dressage has freely offered for decades, and that, I believe, we are too often taking for granted.