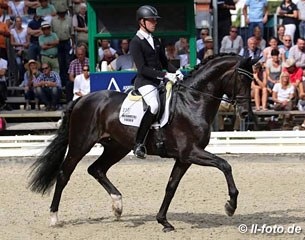 The action continued on the second day of competition, Thursday 1 September 2016,  at the 2016 Bundeschampionate in Warendorf, Germany, with the 5-year old preliminary test as highlight class of the day. The stallions Daytona Platinum and First Ampere topped the board with the former being the high scorer of the day with a winning score of 8.9 points.

Judges Rolf-Peter Fuss, Kerstin Holthaus, Henning Lehrmann had to assess no less than 66 five-year olds on Thursday. The field was divided into two groups because of its size.

Lukas Fischer and Kerstin Klieber's Oldenburg stallion Daytona Platinum (by Dante Weltino x Charon) were the winners in group one and the overall high scorers of the entire class with a top score of 8.9 points. The black stallion got 9 for trot and canter, 8.5 for walk and submission and 9.5 for general impression. Daytona Platinum is bred by Andreas Klinker. The Rhinelander Luiz Gustavo (by Lord Carnaby x Fidertanz) covered second place with 8.6. Under Beatrice Buchwald the bay stallion, bred by Manfred Hödl and owned by Anna Schnurbusch, scored 8.5 for trot and canter, 8 for walk, and 9 for submission and general impresssion. 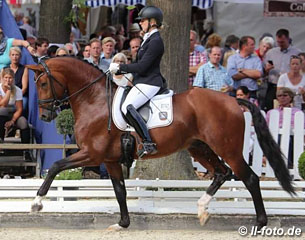 In the second group Tessa Frank and Helmut von Firck's Hanoverian licensed stallion First Ampere (by Ampere x Weltruhm) scored the highest mark of 8.7. The bright bay stallion, who is bred by Jan Siemsglüss, received 9 for trot, 8.5 for walk, canter, and submission and 9 for general impression. Two combinations landed second place in group two with 8.4: Luxembourg Sascha Schulz on Patrice Mourruau's Oldenburg gelding Quel Filou OLD (by Quaterback x Stedinger) got 9 for walk and trot, 8.5 for canter, 7 for submission and 8.5 for general impression. Quel Filou is bred by Aloys Hinxlage and was a PSI auction highlight, selling for 1 million euro, to Mourruau a year ago. Kira Wulferding and the Wittig family's breeding product Belucci W (by Boston x Bismarck) got 9 for walk and trot, 8.5 for trot, 8 for walk, 8.5 for canter, 8 for submission and 8.5 for general impression.

First Ampere represented Germany at the 2016 World Young Horse Championships in Ermelo one month ago. Today's high scoring 5-year old Daytona Platinum also contested the German team selection trials for the World Championships but was not picked on the team.