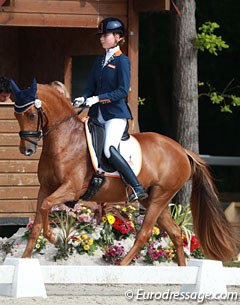 Under Daphne van Peperstraten Wonderful Girl (by Wimbledon) had its peak show season in 2016, winning the 2016 Dutch Indoor and Outdoor Pony Championships and the National FEI Pony Cup finals in Etten-Leur. At the 2016 European Pony Championships they won team bronze and finished sixth in the Kur to Music finals.

Van Peperstraten has to make the transition to junior riders level in 2017 and her pony was for sale. The Baars family acquired the chestnut mare and will keep her in training at Coby van Baalen's yard.

"Wonderful Girl is such a quality pony and has an excellent character. It was a pleasure to coach Daphne and Wonderful Girl," said Marlies van Baalen. "Of course it's nice that Wonderful Girl stays in The Netherlands, despite interest from abroad."