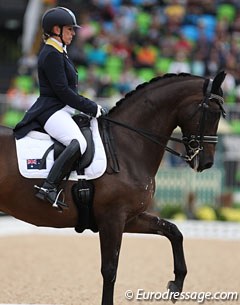 Remmington, the horse of Australian Olympic team member Sue Hearn, has tested positive to the controlled medication Meloxicam at the 2016 CDI 3* in Rotterdam on 22 - 26 June 2016.

The CDI Rotterdam was an official Australian team selection trial, where Hearn earned one of two qualification scores for the the Australian Olympic team. Hearn substituted Kelly Layne who dropped out from the team after her horse Udon P was not fit to compete

The FEI imposed an  administrative sanction on 5 August 2016 as Hearn had not declared the use of the anti inflammatory Meloxicam.

The Australian Olympic Committee became aware that a Notification of Positive Controlled Medication had been issued on 3 August. By that time the Australian dressage team, including Sue Hearn and her horse Remmington were already on the ground in Rio.

There was no travelling reserve with Dressage and it was not logistically possible to make a substitute.

Equestrian Australia nominated Sue Hearn in good faith to the AOC who subsequently selected Hearn to the Australian Olympic Team. Sport entries were complete, the nomination and selection period was no longer current and therefore relevant.

"Sue accepted the administrative sanction immediately and was cleared by the Federation Equestre Internationale (FEI) to compete. Given the circumstances the AOC felt Sue should retain her place in the Team," said an AOC spokesperson.