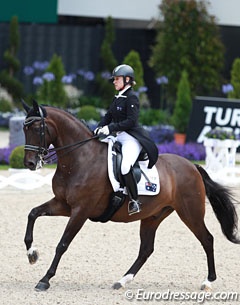 Equestrian Australia (EA) has advised the Australian Olympic Committee (AOC) of the need to withdraw Kelly Layne’s nomination from Australia’s Dressage Team for Rio, after it was determined her horse Udon P would not be fit in time for the Olympic competition.

Despite being in full-work following a minor injury, it was clear to Layne that her horse would not be fit in time for the Games.

“This horse tries so hard for me and will never quit so I know I am making the right decision for him,” said Layne. “His work under saddle is remarkable but when we jog him he is clearly uncomfortable and I would never want to jeopardise the best possible team result in Rio,” she said.

Layne’s withdrawal paves the way for Sue Hearn to make her Olympic debut at age 60. She will partner with 14 year-old warmblood gelding Remmington.

Hearn was a reserve for the Sydney 2000 Team and now becomes Australia’s second oldest Olympian on debut after sailor Harold Brooke who was 61 at Rome 1960.

Based at Berrima in the NSW highlands, Hearn won the Sydney CDI3* Grand Prix in April and travelled to Europe and was one of seven athletes to participate in Australia’s two round nomination series throughout June.