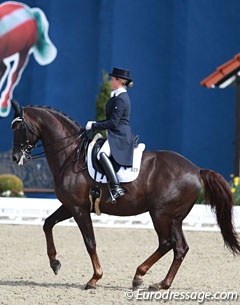 The German based Tanya Seymour has been officially nominated as the South African individual representative in dressage at the 2016 Olympic Games in Rio de Janeiro, Brazil on 9 - 15 August 2016.

"It's official - Tanya Seymour and her very handsome Ramoneur will represent South Africa at RIO 2016," the SA Federation stated. "What an amazing achievement and just reward for this hard working combination. Also a special note of thanks to all the other Dressage South Africa combinations who campaigned in Europe/UK for the past two years in preparation for RIO. As you will recall we very narrowly missed out on getting a full dressage team to Rio."

South Africa falls under Group F and two individual spots were allocated to riders from these groups. Palestinian Christian Zimmerman captured one spot by placing first for the group on the FEI Olympic Athletes Ranking. South Africa obtained one further individual quota place for its highest ranked athlete at the Grand Prix at the FEI approved special qualification event (2015 CDI Perl).

South Africa received the Group F individual spot and decided to grant the Rio ticket to Tanya Seymour, who will be competing Ramoneur, a 14-year old licensed Oldenburg stallion by Rohdiamant x Alabaster.