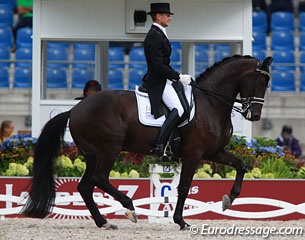 Edward Gal and his number one Grand Prix horse Undercover will not be competing at the 2016 Dutch Championships, the second of two Dutch Olympic selection trials. After missing the first trial in Rotterdam, Undercover will most likely no longer be up for 2016 Rio Olympic Games' contention.

The 15-year old Dutch warmblood gelding Undercover (by Ferro x Donnerhall x Roemer) is owned by Austrian Gaston Glock and Gal announced his withdrawal from the Dutch Championships, which take place on 145-17 July, through Glock.

"We are really sorry, but Edward won't ride Undercover at the Dutch Championships in Ermelo this weekend," Glock stated. Edward added that, "I feel that it is not going to work. Fritsie will get stressed again for sure. It's a pity but our decision is for Fritsie's sake. My ambitions to ride are not as important as the welfare of the horse. So Fritsie stays at home where he is happy!"

Gal is still scheduled to compete his second Rio short-listed ride Voice (by De Niro) at the Dutch Championships. Gal and Voice represented The Netherlands at the 2014 World Equestrian Games in Caen, France.

The Dutch equestrian federation has not yet issued a statement whether Undercover would receive a bye from the two Dutch trials based on previous merit or whether the horse is still in the running for Rio.