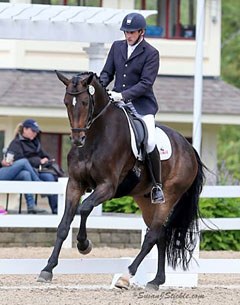 The United States Equestrian Federation (USEF) has announced the combinations representing the U.S. at the 2016 World Young Dressage Championships to be held in Ermelo, The Netherlands, on 28 - 31 July 2016. The United States will be fielding two horses in Ermelo, both six-year olds.

American dressage riders were able to achieve qualification scores for Ermelo by competing in national as well as international young horse classes. The interest in qualifying for the World Young Horse Championsips is quite low in the U.S.A as riders will have to pay their own way to Europe to compete at this event.

The following combinations will represent the U.S. in the Six-Year-Old Division in Ermelo:

Ots has already competed Lucky Strike at the 2015 World Young Horse Championships, which took place in Verden, Germany. The pair finished 11th in the 5-year old finals with an 8.10 score.

Wightman and Silberpfeil competed at the 2015 American Young Horse Championships and finished with silver after scoring 80.800% in the second round.