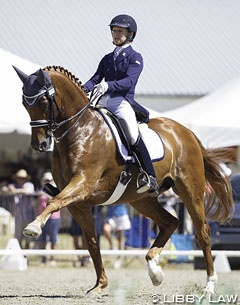 Julie Brougham has been officially confirmed by the New Zealand Olympic Committee confirms as the  country's individual dressage rider for the Rio Olympic Games. Her name was confirmed at a formal selection announcement in the United Kingdom.

Julie Brougham from Palmerston North will compete in the dressage for New Zealand and is just the third Kiwi to do so. Ahead of her have been Kallista Field at Sydney (2000) and Louisa Hill at Athens (2004) and London (2012). Brougham departed for Europe in March to focus on her Olympic build-up and is excited to be joining the team for Rio.

“I am very much looking forward to being part of the New Zealand team at Rio,” she said. “Now we can focus 100% on the preparation and training for the games.”

Equestrian Sports New Zealand High Performance Director Sarah Dalziell-Clout noted the tight competition for these Olympic spots and commended the high standard set by all riders vying for a place in Rio.

“It has been an incredibly difficult process for selectors for both dressage and eventing,” she said. “For dressage, it has been an exciting time as new levels have been reached by our two high performance combinations (Brougham and John Thompson). With such a hard-fought contest for this single place, it was disappointing to not be able to have selected them both."