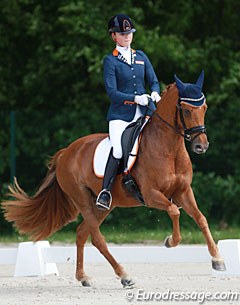 After a series of six qualifiers in The Netherlands, the KNHS FEI Pony Cup came to a conclusion in Kronenberg. The show circuit is for Dutch FEI pony riders and its events are considered squad selection trials.

Van Peperstraten and the German Riding Pony mare Wimbledon, who is bred by German A-team rider Sönke Rothenberger and sired by Sönke's old FEI pony Wimbledon, scored 74.91% in the first round and 77.75% in the Kur to Music. The 16-year old is in her last year on ponies.

"In the first test I rode both Wonderful Girl and Don Camillo du Bois and both ponies went well," said Van Peperstraten. "We had nice scores with room for improvement. In the Kur I was only allowed to start one pony. I chose for Wonderful Girl because I want to take her to the European Championships this year. Half way in our freestyle our music stopped and they didn't get it to work again. I had to ride the entire freestyle again and the points started counting again from where the music had stopped the first time. This was not very handy, but fortunately it worked out well."

Team mate Zoe Kuintjes and her German Riding Pony Elin's Nonsisdador (by Nostradamus) finished second with a 71.84% and 74.25%, whime Marten Luiten and the bay Movie Star (by Hagelkruis Valentijn) landed third place with 69.62% and 75.375%.