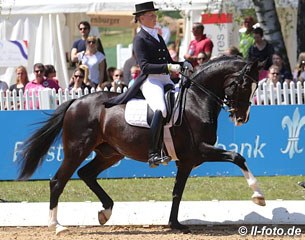 Pia Laus-Schneider, who was Italy's highest scoring Grand Prix dressage rider in the 1990s, has returned to the international show scene with a new horse She has already made a statement by putting promising scores on the board in Munich. With her Mecklenburger bred Shadow (by Sancisco x Lagoheidor G) she has now swept the big tour division at the 2016 CDI Samorin in Slovakia.

The 48-year old German born Pia Laus-Schneider is a triple Olympian and was trained by Uwe Schulten-Baumer in the nineties.  She made her claim to fame aboard Adrett, Liebenberg, and Renoir. Her last international Grand Prix horse was Worcester (by Weltblick x Contango) which she last competed in Compiegne in June 2013. On 1 July 2013, the dark bay gelding suffered from a pulmonary oedema and passed away.

Laus-Schneider has returned to the big ring aboard the 10-year old Shadow as her new star for the future. In 2015 the pair became the reserve regional champions in Mecklenburg-Vorpommern and they made their international medium tour debut at the CDI Hamburg in May 2015, where they scored 70.500% and finished second in the Intermediaire A. One year later they had their Grand Prix debut at the 2016 CDI Munich in May. They finished 10th in the Grand Prix with 67.340% and 11th in the Special with 66.431%.

At the CDI Samorin on 20 - 21 May 2016 the pair found their groove and won the Grand Prix with 70.640% and the Special with 71.961% making her Italy's highest scoring Grand Prix rider at the moment.  Laus-Schneider, however, does not hear Olympic bells ringing.

"I had a very good feeling on Shadow in Samorin," Pia told Eurodressage. "It is a great place for a show. Compared to Munich, Shadow get more and more relaxed and concentrated. Until there he was not used to this big atmosphere, but he is getting there. In my feeling he is more proud of himself. That's why it would be to early to think for the Olympics this year. I would like to build him up slowly, because he is a wonderful horse, which wants to do always everything right."

Laus-Schnedier has owned Shadow for the past seven years and trained him up the levels herself. "I found him in Mecklenburg in a field when he was 3 years old," she explained. "A friend of mine had him. He was also the owner of Worchester when I bought him."

Pia will be taking it nice and slow in 2016 and develop Shadow gradually. She has set no big goals for the year. "I will be riding Shadow at some more CDI and see how everything is going on," she said. "I am so happy to have such a nice horse again."