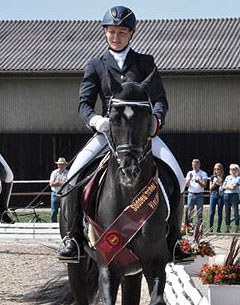 The 5-year old Feriado and the 6-year old Sir Diego R became the winners of the Bundeschampionate qualification classes held at the regional show in Aulendorf in the Baden-Wurttemberger province on 22 - 23 May 2016. Only 13 pairs showed up for this small qualification event.

The 5-year old division was judged by Gerd Sickinger and Johann Speth and they named Nicole Casper and the Bavarian stallion Feriado (by Fabregas x Riccione) the winners. The pair scored 8.1 for victory and edged out Fritz Fleischmann on the Hanoverian stallion De L'Amour (by Don Henrico x Walt Disney I). This duo landed second place with 8.0