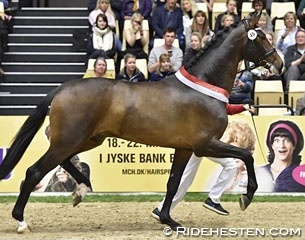 Twelve 3-year old colts received a positive verdict at the 2016 Danish Warmblood Stallion Licensing in Herning, Denmark, on 19 March 2016 and will move on to the 10-day Stallion performance testing next week to obtain licensed status.

The 2016 Danish warmblood stallion licensing was dominated by foreign bred stallions. This year's licensing also heralded a new era in which the monopoly position of Blue Hors stud in Randbol, Denmark, was taken over by horse dealer and Grand Prix dressage rider Andreas Helgstrand.

Out of the twelve 3-year olds only four were Danish bred, the rest was bred in Germany and The Netherlands. Eight of those twelve are (co-)owned by Helgstrand dressage!